The breakfast table on the last day of a road trip is always subdued, everyday life seems very dull after the full days of route finding, scenery, overtaking, mending cars & the banter that goes on over the radios. but all good things come to an end & it just makes us look forward to the next trip, but first - day 5. 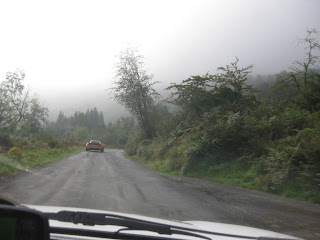 We headed out the way we had come in the night before, a twisty single track road that seemed to have more than it's fair share of commuter traffic, but we were soon onto the wider roads & making good time, the plan was to make for the border & have a last lunch at Bourton-On-The-Water before going our separate ways. It kind of worked, we all arrived at the fuel stop together, but the traffic was getting steadily heavier which always splits groups up. 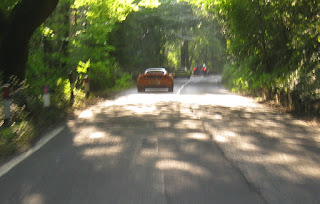 I left the fuel stop last & was following along until roadworks meant two lanes became one & the lorry to my left was not going to let me in if he could help it. Robert two cars in from noticed & slowed to let me in front. A couple of roundabouts later The other two cars were no longer behind me - I suspect SatNav divergence, but when I rolled into Bourton it was rammed full of folk making the most of some pre "lockdown-the-send" sunshine. I drove through the town & sent a message asking where people were, the Elises were pulled over ahead, so I drove on, then thought I must've gone too fa so drove back, then found out I'd turned round about 50 yards before I'd have seen them, then heard the sevens had parked up in Bourton, but by this time I was heading back.......

In the end I set the SatNav for home & cruised along the M40. It was a pity to miss out on the proper goodbye, but that's the way it often is on road trips.

Roll on the next one!