It's raining today - in marked contrast to yesterday where after a foggy start it became almost uncomfortably warm by mid afternoon.

I know this because I was out in it all day. It was the annual SKCC visit to North Weald to meet up with the chaps at "Car Limits" & thrash our cars around some disused RAF concrete.

This year I would be taking my son Callum, so I needed to go the south way round the M25 where there was fog in abundance, so the first of many firsts today for the Fury - the first time the rear fogs & the screen heater had been on together. I arrived at Callum's to be handed a coffee & a bacon roll by his lovely wife (anyone who hands me a coffee & a bacon roll qualifies for the title "lovely"), after which we set off into the murk. Under the Thames & into Essex the fog was if anything, worse. The nearside rear tyre still touches the exhaust when two-up & turning right - I know this because I looked in the mirror on the fast right hander at the M25 - M11 junction & saw the trail of tyre smoke we were leaving. But it wasn't too long before we rolled onto the airfield, past the Hurricane-on-a-stick & lined the Fury up with the other cars before signing on & having the Driver's briefing.

I was a little nervous about the noise test, as the Fury can be quite loud & at Castle Coombe it just squeaked past the 99db limit, today the limit was 105db, but there were no problems & we followed the instructor to the far end of the Car Limits area & along the long straight, then left along the line of an imaginary wall (to be avoided when doing this exercise for real). I did the first run to give Callum an idea of how fast the fury would corner, then pulled over & we swapped seats. Callum has only ever driven modern front-wheel-drive cars, so the Fury with un-assisted steering & brakes came as a bit of a shock, but we rolled round to the start line & waited our turn.

I was expecting to have to goad Callum into going faster - not a bit of it - we set off towards the corner as if the hounds of hell were on our tail, to the extent that as the corner raced towards us, I was thinking "we're not getting round this" - and we didn't. The back of the car caught up & overtook the front in a long sliding pirouette, the tyres scrubbed off about 75mph & we came to rest in a cloud of our own smoke laughing hysterically.

This was excellent, I'd been concerned that he wouldn't want to push too hard in my car, but I could see that wasn't going to be a problem. So onto the next run, a little lest speed & we were round successfully. I drove the next & was clocked at about 60ish mph at the corner, then Callum did another couple. The first one went well, high 50s at the bend, the back of the car started to drift, he steered in & caught it. It wasn't necessarily pretty, but it was a success. The run after than raised the speed a little more, again the car stated to drift, again he caught it, but wasn't expecting the snap back the other way & again we pirouetted to a smoky stop. 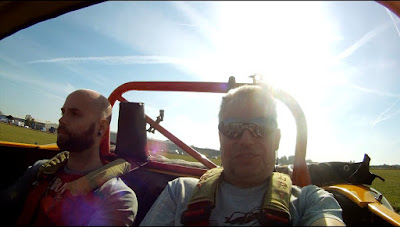 The next few runs saw us both raise our speeds until we were both in the mid 60s, which to be fair is as fast as the Fury has ever done it. After lunch a track was set up to replicate that used by the MSA for actual time-trial events & if Callum thought he had the measure of the car now, he was about to be proved wrong. The track started with a chicane, then a long straight, brake hard for a circle, then back along the straight & the same left we'd been practicing all morning, through a tarmac tightening right - left - right, off down the concrete, round a single cone & back to stop  between two cones. 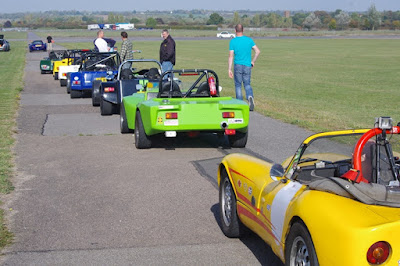 Again I did the first run as I knew the layout. Off the line, into second, through the chicane, up to 5-6k RPM, into third, into forth doing maybe 80, hard on the brakes, drop straight into second, round (countering understeer & then oversteer) then back. Great fun. Calum's turn - off the line, into second, into third, round the chicane & accelerate ish as we were in too high a gear, at the end of the straight brake too soft & too late, brake harder & understeer across the circle, then try to get the car going again in forth, change to third, change to second...... OK, I should've explained what I was doing as we went round the first time - my mistake.

I tried to explain in a ham-fisted way about synchromesh & at the end of the straight, as we're slowing down put the gearstick towards second & wait for the gear to drop in, take the corner & accelerate round the circle in the right gear for the job - which he would've - but concentrated on the gearstick & forgot to brake, so we slid across the circle again, but picked up much quicker.

On the Third attempt & it all came together, we were in the right place, in the right gear, at the right speed, more or less all the way round the bit that had been troublesome, then going round the single cone at the end caught him out & resulted in the longest slide I've ever known ☺.

At this stage Callum decided to take some pictures of me driving round. I was waiting at the start line when one of the instructors just jumped in & said "off you go then". So whether I liked it or not I was given instruction on how it should be done. Jees, that car can fly! "faster", "faster", "brake now - harder - HARDER", "second gear - accelerate - HARDER" Hard on the brakes .... NOW!", "part throttle .... part throttle .... FLOOR IT!" It's amazing what abuse the Fury will take & keep going in the right direction.

So what did I learn? I'm not sure, it was all a bit of a blur! I learnt I can rely on the Fury more than I though I could, that it will change direction like lightning if you drive it right & that the brakes are much better than I thought possible. The instructor guy seemed impressed too, he'd said right from the start that he'd always liked the Fury, when he got out he was talking about getting on to Fury Sports Cars & building one!


But back to Callum, the last run of the day & Callum was determined to get a "clear round". I got him to keep the car in gear for longer so we were faster & the trip round the circle worked well again, we accelerated hard up the straight - & span on the left-hander at the end. He was gutted - but for someone with little driving experience & certainly no experience at all of driving like this, he gained a good mastery of all the track's elements - just not all at the same time. I was impressed, a couple of goes with the instructor would've seen him getting really good times - better than mine & I couldn't have that, unfortunately the day was just a little too short - next year maybe.