Getting The Average Up

So far this year my Blatting average is pitifully low. Before August I'd been on only one SKCC run + the Rogue Runners trip, but my score is improving with three runs in August. Today I met some others at Buck Barn & we headed west almost to the A3, before heading back to finish at "Billy's On The Road" not far from Buck Barn. 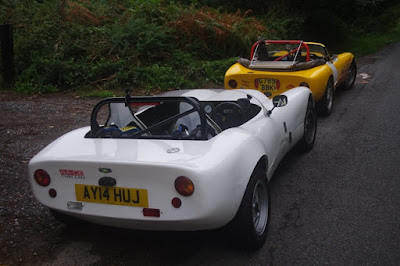 The roads were wet when I set off, but it seemed pretty localised & by the time I reached Buck Barn (only a little bit late) they were dry. I was, as I mentioned, a little late & as I pulled in I assumed I'd missed them, but the sneaky crew had parked to one side of the usual spot, behind a headge. Soon after me, Russ arrived, so there would be two Furies today, about as different as they can be, as Russ' is a spyder done in a stripped out style which made mine look almost luxurious. 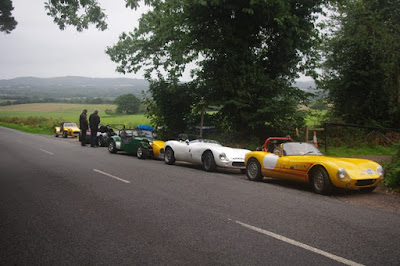 I ended up leading today & for once didn't immediately make a wrong turn, the route was excellent, the weather was dry & the traffic was light, so we made good progress. After 40ish miles I was looking for somewhere to stop for a break (& a leak), I rejected a couple of places, couldn't stop in time for another couple of places, but eventually spotted a field entrance with a pull in large enough for all the cars to get off the road & crucially - it had a hedge. As soon as we all got in & off the road, the very next car squeezed in between two kits & turned round to park in the field. We were all expecting a "GET ORF MOI LAAAAND!", but the chap got out waved a cheery greeting & wandered off.

After we set off, there was the inevitable closed road. I passed the signage hoping we might be OK as the SatNav was saying turn off in 0.3 miles, but it was not to be, the road was properly closed after 1/4 mile. So we deleted a couple of waypoints & turned round, only to find the main Horsham road closed by a fallen tree! Fortunately it was a very considerate tree & had only fallen across one side of a triangular junction, so after a quick diversion round the other two sides, we were on our way again.

Then all too soon we were At Billy's for Breakfast, where we ate a hearty full English over a train set mounted in a table. Sadly the trains weren't running - presumably due to the wrong kind of model snow or something.

When we left it was raining, but it soon stopped & I had a pleasant ride home
Posted by BlatterBeast at 14:23