Home from work early & straight out to the garage. I made up a small wiring loom for the back of the new socket panel, tested it, & fitted it. It's not an easy thing to photograph, but that's a good thing - it's not supposed to stand out, it's supposed to do it's job well, but quietly. 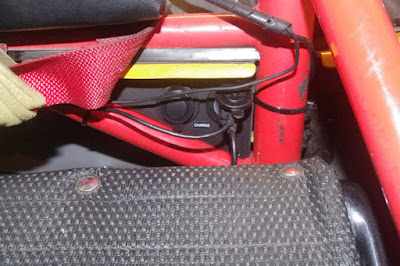 Here's how it looks - bearing in mind that the flash has lit the matt surface, you cant see it that easily in real life. The two USB sockets will run the GoPro cameras, the new 12v socket will run a "battery eliminator" on a two-way radio ready for the "Rogue Runners" tour of the UK later this year. The plan is that the radio will spring into life when the ignition is switched on.

I've also been looking at the antenna for the radio, I've separated it from the radio with a lead, but how to mount the antenna when I'll need to put the soft top on from time to time? I think the solution is pretty cunning, I've glued a bracket onto the side of the forward looking GoPro which sits above the roll bar, so when I fold down the camera, the antenna goes with it. Genius.
Posted by BlatterBeast at 19:50