Each day I wake up closer to the alarm time – only 5 mins early today.

Having taken note of the unseemly melee that occurred last year (after I’d dropped out) with a whole herd of pensionistas elbowing the strapping young men of the SKCC out of the way to get at the breakfast, it had been set up so that we ate first, so were all done by the time the mob arrived.

Some farewells were said in the carpark, as some would be heading straight home, others were making directly for the kit car show at Stoneliegh. The rest of us fired up & headed for the coffee stop where the road trip officially ended. So there was a noisy departure from Llandidrod Wells, & I’d almost gone two miles when I remembered I’d not re-connected my magic wire installed by Ash, so was running on 9 volts. I hastily pulled over & reconnected it. Graham stopped to ensure I was OK, but after a few seconds I gave chase again. 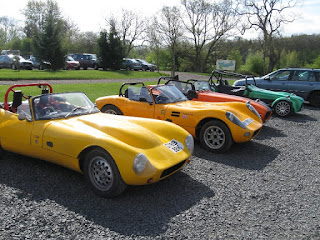 After a mile or so I found Mr Mango waiting in a lay-by (a habit of his I’m told) so the two Furys were once again in formation when we found another bunch in a petrol station. Now back in the middle of the field, we re-entered England & had a run up & then down Clee Hill, where the Mango Fury almost served lunch direct to it’s driver when a pigeon left it a little late to take off from the middle of the road. At the coffee stop, some were already supping when we rolled in and as others arrived there was another wildlife related tale of woe. It seems one of our number had hit a dead badger which took a large chunk of the rear wing & the geometry of the rear suspension with it.
However, drinks were drunk, cake was eaten & an extremely attractive waitress was looked at, then we said our goodbyes & separated.
We also saw an extremely large cock.
I took the fast route home, along the motorway & arrived with a dry tank, ready for the repairs to a number of bits of the car to begin.

Highlights?
The route as ever was spectacular.


The hotels were superb.
The camaraderie – always a feature of SKCC runs was as good as ever, with everyone doing their utmost to ensure broken things got mended(ish) – at least enough to allow them to carry on.


The scenery was outstanding.
The SKCC is nothing short of an inspiration.