Please bear in mind dear reader, I’m writing this after a pint or three & an abundance of banter.


So, (struggling already to put hotel images together with day numbers) today began also in Llangollen with rain. Not just any old rain, this was precision guided rain. It waited until just about everyone had taken the covers off their cars, THEN it rained. But we cared not. 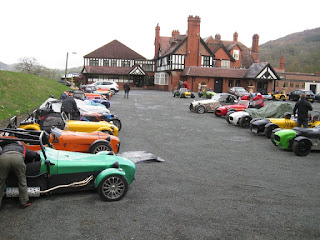 The route was planned such that an intrepid few would leave early & head out on a longer blatt, while those of us that were softer / more sensible / hung-over* would have a little extra time to gather our wits.


*delete as appropriate
Eventually all the cars started & turned left out of the hotel, except for Mr Mango & myself & Red27, who went right. Myself & Mr Mango knew we were heading on a small de-tour to see a spectacular aqueduct carrying a canal over a valley. 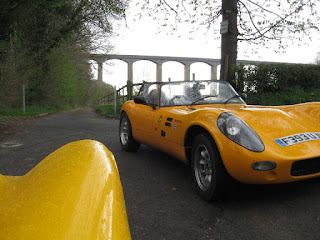 I suspect Red27 thought she was heading out on the route – until we went through a farm yard & liberally coated the rear arches of her car in cow dung. Aqueduct seen & photographed, we kind of went back to the route, though we lost Red27 in traffic.
Last night I had joked that we hd been going SO fast that we were almost as quick as a local – in a diesel pick-up – pulling a trailer – full of sheep, well today my joke was made real on a single carriageway A-road by a local overtaking a car & caravan, at a speed of 70mph while diving a diesel pick-up - towing a trailer – full of beagles. Next stop for us was a small town in the back of beyond. This was another of Mr Mango’s must-see architectural wonders, a railway viaduct across a bridge. To see it from the optimum angle required driving though the small town of Fairbourne, 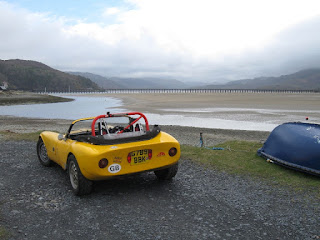 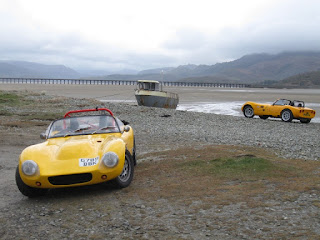 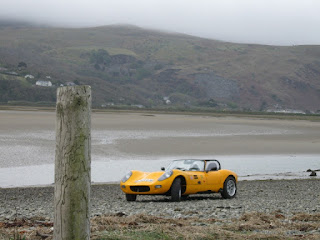 which had the air of a town put in as a tourist attraction that never really happened, but the road ended on an estuary beach of significant proportions & as I am fond of places “at the end of places” I was happy to wander about taking photos while the locals looked at our cars like they were from another planet.

By this time I needed fuel, but the only station close to our route was charging 5p / litre more than anywhere else – moderated on this occasion by the guy behind the counter mis-reading the till & charging £20.84 instead of £28.84. After that, as oft happens on these occasions we arrived at a junction just as the hard-core, long route blatters appeared from a side street, still dripping mud from a route along a forestry road. After some lake-side motoring at moderate speed(!), we arrived at the coffee-stop hotel just in time to see a bunch of the SKCC leaving. Helpfully we were warned against engaging the hotelier in conversation lest we be regailed with a story about an aquaintence of his who had recently undergone “gender re-assignment”. Good advice indeed. 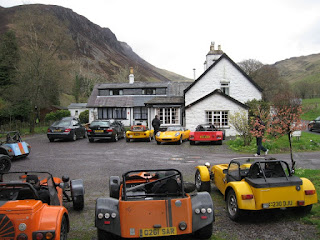 After coffee & a lecture about turning off lights & taps, we returned to our journey, briefly all together, until one of the Mango’s detours loosed us from the pack. Again spectacular scenery & photos of the cars in front of it ensued, until we rolled into the lunch stop. A small establishment at the end of an enthusiast-run narrow gauge railway, made jangly by dozens of wind chimes for sale. Lunch eaten (I had cake) we mounted up & I disturbed the peace again with the atrocious racket produced by my starter motor. On this leg we were delayed climbing into the hills by a party of bikers seemingly determined to not go more than 40 & not keep to one side. 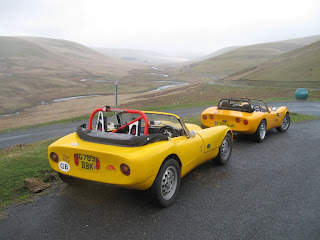 To avoid getting REALLY ANGRY we stopped at an exquisite spot with a stream tumbling over rocks, a small bridge & some artistic dead tree for good measure. We were about finished with the photographic opportunities this provided when the SKCC appeared on the road up the valley. Mr Mango & I hurriedly took up station with our cameras & he got some excellent photos. 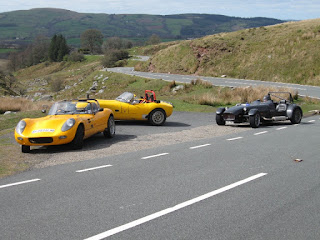 After that, it was back to the grim reality of driving excellent cars through stunning with a bunch of mates.


We rolled into Llandidrod Wells & parked up. 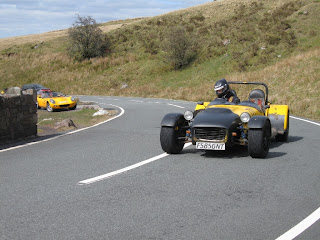 We had a beer in the hotel, then went out looking for tea, but it seemed that Landidrod Wells closes early on a Saturday evening. We found a hostelry where the chef was about to go home, someone persuaded him to cook another 12 meals & the banter flowed, culminating in a beer-mat flicking competition where the maximum No. successfully flicked & caught was 14 – mostly because we only had 14 beer-mats.
Posted by BlatterBeast at 21:14