Things have moved on, I’ve now finished the side pod. There were a couple of intervening days of effort on it, I fitted the heat shielding back on the inside, cleaned up the outside & gave it a polish. 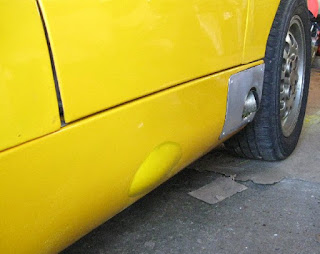 I made up a new external heat shield (which hides the now enormous hole in the pod). I’m quite pleased with it, it has a lip curved round into the wheel arch, & a rolled edge round the hole the exhaust tip pokes out through, which is pretty central. 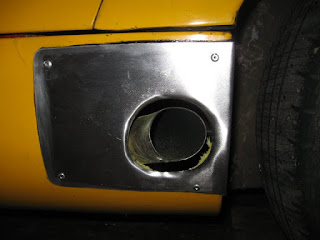 Here we see the plate in place - not the best photo, the reflections of the flash make it look crinklier than it is, but you get the picture.


In other Fury related news, I had been considering putting the car on a SORN (Statutory Off Road Notice) for a while, the decided not to, so I was intending re-fitting the alternator & getting it going again. Could I find the bracket? I remembered taking it in the house to clean up, I remembered EXACTLY where I'd put it - but it wasn't there. I searched the garage, the rest of the house, nothing. In the end I thought I may as well SORN it as without the alternator I wasn't going to be using it until the new one went on after Christmas, so I reluctantly downloaded a form, filled it in & put it in the post box just outside my house on the evening of the 30th. You know what's coming next don't you. Early in the morning of the 1st, with the form STILL in the post box, I found the bracket.

So the car's officially off the road, time to get on with some maintenance / upgrading. The first thing on the hit list is the dash. Thee stereo hasn't worked properly for a while because the jack-plug from the iPod would wobble about. So I acquired a 1/4" jack socket & a new lead. The old socket was a pain as it had to be screwed to the dash after the dash was in, the new one should be much easier.

The next thing was the car's many & various 12v sockets, currently two behind the passenger seat, one the far side of the dash & one on the driver's side of the dash - all with transformers plugged in to run electronic stuff. With the ferry & navigator booked for the Rallye Des Jonquilles, I looked at the required equipment list for this mission:-
Sat-Nav
Sat-Nav programmed with trip computer.
Fwd camera.
Rear camera.
GPS data logger.

That's five then. Doing some Ebay engineering I found a 12v multi-socket & a couple of nice "adaptor socket" that converts a 12v socket into two USBs, so I'll fit the 12v socket in the passenger footwell, with a USB adaptor in each & that'll power all the toys, another adaptor will go in the back allowing me to simplify the wiring there.

I know this is all pretty dull, & I apologise, but it'll all go to make the car more reliable next year.
Posted by BlatterBeast at 08:25