Day 4, The SKCC were up with the lark & had mostly left before the canteen restaurant opened. A few stragglers hung on in the hope of bacon & were lucky enough to be loitering by the door when it opened, so we got first dibs on the finest morning fayre Blackpool can provide. The sun shone brightly on the battlements as we handed in the plastic room keys & headed for the cars. My starter motor had been playing up & making horrendous noises in it’s attempts to fire the Zetec, & this morning was no exception, so I had made it my policy to start the car before other people were in their cars so if it did give it’s last gasp, there were folks about to push start it. However, start it did & I sat with idling engine until my comrades had mounted up, then after refuelling & waving a cheery finger as we passed BAES’ Warton site, we headed out of town. This was probably the worst part of the trip, traffic, endless suburban sprawl, speed cameras & problems with satnav route dominated our attention, but before long we were under the Mersey & making for the border. 24 hours ago we’d been in the letter L refusing “Annik”, now we were in a land where they couldn’t get enough of the right-angled blighters 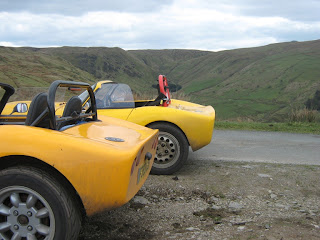 & indeed were very keen on consonants of any shape, but vowels were out of favour it seemed. The roads & the scenery were getting our attention, with wide sweeping bends, mountains blue / grey in the distance & a growing anticipation we headed west. We wended our way down through Snowdonia through some truly spectacular scenery, the weather stayed dry, it was bliss. We even caught up with the group in front, only to lose them again when we stopped at a petrol station best described as “rural” it was an agricultural workshop with a forecourt full of Land Rovers & quads, it had two pumps of 1970s vintage, & a bloke in very greasy overalls who had to put down his spanners to serve us. I loved it – it wasn’t even close to the most expensive fuel we bought either. The next stop was lunch, we wound out zig-zag drive into a car park  & entered what looked like a really nice establishment, walked through to the bar & stopped in our tracks at the view. The Hotel was at one end of the Vyrnwy  reservoir, high up & with a large picture window & patio overlooking the scenery. We ate outside. I considered indulging in the Stowfold Press cider – until I read “Hot chocolate – with marshmallows, whipped cream, flake & crushed honeycomb” I took my coat off to make quite sure I was cold enough to need warming up by such a beverage. After lunch we dragged ourselves away from the view & watched while the Tiger drivers among us compared alternator bracket faults & replaced worn & broken bolts, then after some more unpleasant mechanical noises from my starter motor, we were away. At the bottom of the hill was another rustic service station, this time little more than a hole in a cliff face, with one pump. I didn’t need fuel just then so after driving back to check Mattijs was OK (his satnav was out of battery) I didn’t want to turn the engine off again, equally I didn’t want to sit with it idling while four cars filled up from one pump, so I said I’d drive on slowly until they caught up. I set of at a sedate pace (about 30mph) then realised I would need fuel later on & if the “station” was like the last two, they were unlikely to be open after 5:30, so speeded up – but only to about 40. Then suddenly there was a corner – a hedge – a bank – a sudden stop.


I can’t explain what happened. I was rested, I’d had no alcohol for over 36 hours - & not a great deal then. I wasn’t speeding, the GPS data logger confirms this. There doesn’t appear to be any faults with the car. Just a loss of concentration I guess. 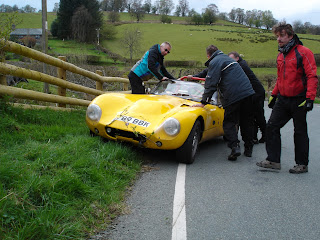 The car was now perched on a bank on the wrong side of a very rural road, with no phone signal at all. I tried to extricate it, but the offside front wheel was hooked over the edge. After a few minutes the rest of the bunch came along & helped me pull the car out. The bonnet was pushed in & the radiator was vee shaped & leaking. It was game over for me. I gave the car a very quick check over, started it up & drove slowly for a mile or so until my phone came to life then called the RAC. About two hours later I was recovered to the depot & handed the keys to a ford Ka. What I should’ve done was driven to the pre-booked hotel, slept & driven home the following day. What I actually did was drive direct to home from Welshpool (it wasn’t actually Welshpool, but it was close & I can spell it). The rather sad looking Fury arrived late the following day & I immediately removed the battered bonnet (as it wouldn’t open) & surveyed the damage. It appears to be light, just the GRP front & a new radiator required. One of the engine mounts looks as if it might be cracked, but I’ll need to remove it to be sure.


So, an excellent time curtailed with rather unfortunate end.
Posted by BlatterBeast at 19:29