A club run in the evening from my local meet point, Newlands Corner was too much to resist, so with the Fury bonnet patched up I headed somewhat nervously through the Guildford traffic. At the car park, discussions were centring around who’s car would drop out first, a number of faults were being complained of, from my car’s expedition into the hedge, to a shortage of water, there were also complaints about closed roads, as we were to find, Surrey & Sussex councils have a road repairing frenzy going on – this is a good thing, but they will leave “loose chippings” in heaps anything up to an inch deep in the road, but there were lots of signs saying “SKID RISK MAX 20” – so that’ll be OK then. 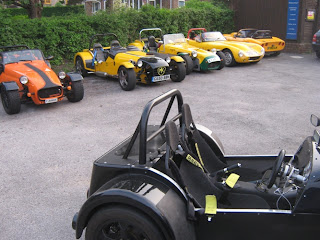 But I digress, to begin with the run was something of a procession, stuck behind any number of slow moving hatchbacks, vans, Land Rovers, but as we headed south into the badlands of West Sussex, the traffic thinned as the roads improved. There were the usual satnav inspired divergences, an occasional P.A.M. (Puckered Arse Moment) caused by the aforementioned loose chippings & a pleasant drink in a country pub, but at the end we were all still present & correct, so that must count as a success.

We passed in formation through the Hindhead tunnel keeping all very quiet - yeah right.

The truly astonishing thing about this run though was the weather – glorious sunshine & WARM! It appears that summer 2012 has at last arrived. Hoorah.
Posted by BlatterBeast at 21:33