So, it's been a little while since last I wrote - how have you been? 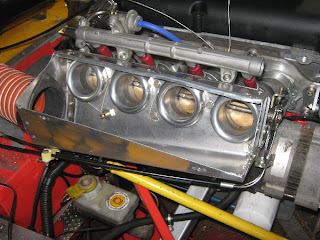 Things have moved on in the garage, as you would expect, the airbox is finished, the trumpets are all trimmed & fitted, the bolts holding the airbox to the back-plate are wire-locked & secure. It's a thing of beauty though I say it myself. I really like polished aluminium, it has a "technical" look about it.As you may be able to see, the air temperature sensor for the ECU is fitted & it's retaining nut wirelocked & the throttle cables are laid in, clipped to the airbox & connected. The pedal travel was far to short, so I re-drilled the bracket & moved the cables over an inch toward the pivot point, it now feels good, if a little light, but as I've lost the spring from the pedal - it'll be in a "safe place" somewhere - the fine tuning will have to wait. So, what was next? 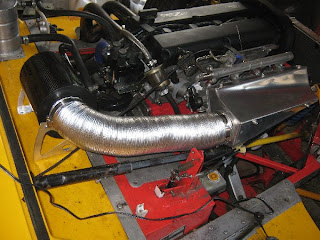 Logically it had to be the filter, so the intake was kept clean. I'd bought a carbon fibre air filter from CBS just before Christmas, it came with a lightweight stainless clamp type mounting, but I drew up a couple of brackets & made them out of 1mm aluminium (with stiffening flanges) that mount the filter to the "shelf" behind the engine. It was an easy fit, it weighs next-to-nothing, so four 4mm pop rivets is sufficient & I also cut & fitted the aluminium trunking that takes the clean air to the airbox. It's surprisingly stiff so need no additional support. Not sure how long it'll survive attached to a vibrating engine, but it should be OK.

Shouldn't take long then should it?
Posted by BlatterBeast at 17:23