Nothing very interesting going on with the Fury at the moment, it's all piping & wiring I'm afraid, but assuming you're still awake after reading this far .............


I had a bit of a non-productive weekend, Mrs Blatter had a migraine for most of it & I was suffering with something similar, so I didn’t spend a lot of time in the garage. I was also unable to pop over to Neil's “man cave” & turn down a fitting ready for the banjo connection (more of this later), so that’ll have to wait for another day.
I did manage to remove the fuel pressure regulator, cock & associated plumbing, & bent up a new piece of copper tube to connect the pipe in the trans tunnel to the swirl tank, it needs a couple of new clipping points added, but is quite well hidden round the inside & underneath the tank.
Another thing I got round to was looking at the wiring loom for the Omex ECU, splitting out some wires that will need to stay inside the car ( as opposed to running to the engine bay), putting some split convoluted tube round the main part of the loom & fitting the large grommet that used to go round the fuel cock, round the conduit instead, so it uses the hole in the tunnel top deck vacated by said fuel cock saving me struggling to drill a hole in an area congested by wiring, piping & a gearbox. This is a good thing.
I mentioned a fuel fitting, this is the Suzuki input to the fuel rail. As luck would have it the bent pipe on it is 180 deg from where I need it, & when I took it off I found that in contrast to the cunningly shaped lightweight aluminium you'd expect on a performance bike, this fitting was just a slab of steel. So I hatched a plan to turn down the fitting, open the hole up to 8 1/2mm, tap it M10 & fit a banjo fitting in it's place, you can see the before (current) & after (soon to be) pictures below & hopeful they make some sense. As luck wouldn't have it they are shown opposite ways round, so the photo is the downstream end, the drawing is the upstream. 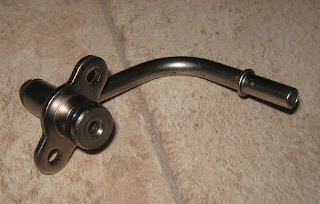 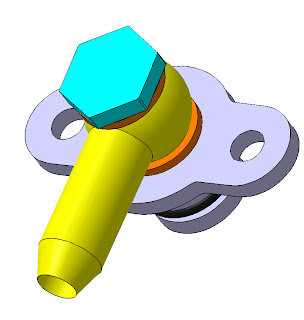