Where was I?
The Zetec conversion seems to have ground to a crawl of late, partly because I keep inventing interesting projects to add that were not in the original game plan, like building my own engine mounts & a cold air intake. But mostly because I've been taking it slow - no point rushing it when they're about to dump tons of corrosive salt on the roads. 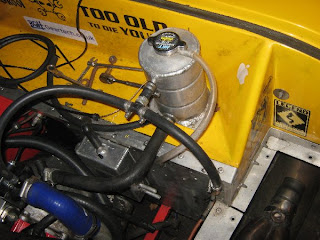 This weeks progress revolved around pipes of a variety of kinds. After my big box of bits arrived from the nice men at Car Builder Solutions, I set about making the cooling system complete. This was "just" a case of joining the stubs on the thermostat housing to the bottom hose, but I managed to make a meal of it all the same, adding tee pieces into the bottom hose in such a way that they're hidden by the chassis. It's still not quite finished as I need another 19mm 180deg bend having used the first one next to the radiator instead of where I bought it for. Next was the expansion pot, mounted on a quick-release set up on the "shelf" behind the engine & thus right in the way of the cold air intake. To ease the intake fitting & make the pipe runs prettier, I removed the quick release frame & hard mounted the pot turned through 90deg, this took a while to achieve nicely as it had to be trimmed to get it as far outboard as possible. 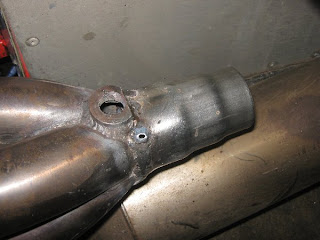 Then to the exhaust. When I bought the second-hand Powerspeed header the chap pointed out that it needed a little welding - it had been sawn off! so in the CBS order was a stainless exhaust stepped reducer, & I'd bought some stainless welding rods some time before. I started by removing the collector & chopping the reducer to fit on the cut end, then tried to tack weld it - this resulted in it being welded all right, but also blew a large hole in the thin tube. Too much ampage I think. Then I couldn't get it to arc at all & cooked a couple of rods. By the time I'd got the amps right & welded up the holes I'd blown, I'd used all the welding rods & there were still a hole or two to be welded up as you can see from the picture, so there are some more rods on order & hopefully I'll be able to finish it - then comes the joy of moving the silencer back to mate with it while still getting a tail pipe round the side impact protection bars. Hmmmmm - looking forward to that.
Posted by BlatterBeast at 20:50