The time has come, over the winter I'll be taking the trusty crossflow out of the Fury & replacing it with a much more modern engine. Silly as it sounds, this will be quite emotional, as that very engine has propelled a car of mine for the last 14 years, firstly my Rickman Ranger, then the Fury. In all that time it's let me down once, which isn't bad at all. I love the sound it makes & the way it pulls like a terrier - not pulling super hard, but you can just feel it's enthusiasm - or maybe I imagined that bit - I'm only replacing it because I got a redundancy cheque & if I don't uprate the car now, I never will. The engine's not retiring though, a guy called Mark is buying it from me to fit into a Mk1 Escort he has, so it's sort of full circle really, as that engine was probably in an Escort when it first left the factory. 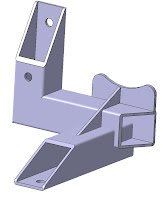 However, onwards & upwards & I've been drawing up some engine mounts for the new Zetec. I could just call Fishers & buy some, but I think I can make them lighter & certainly cheaper. The offside one.s no problem as the mounting points on the engine are in a similar place to those on the Crossflow, but on the nearside it's not so easy. I sketched out a few ideas for things that would be a/ strong enough, b/ light & c/ I'm able to make them in my garage. The first idea looked like this:- 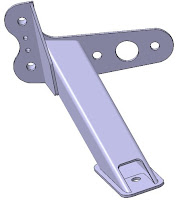 It'd do the job, but it's not pretty is it? So I thought again & came up with this:-


Much neater & should work a treat. Of course the design may well get "refined" as I start working, so we'll see what it ends up looking like. 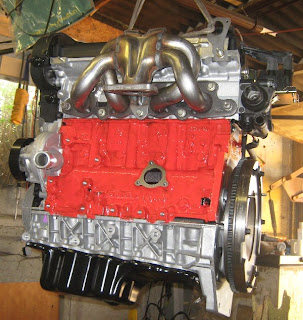 I've also started working on the engine itself, it's had a coat of paint & the 2.0l flywheel has gone in favour of an 1.8l one, the 2.0 one is like a millstone in comparison, & after all, weight is the enemy. I now really must order the special bolts for the big ends & the flywheel, so I can change the sump & get the engine ready for fitting.

Hopefully it won't take too long before I'm back out on the roads.
Posted by BlatterBeast at 15:48