Last weekend may have been my last blat of the year. The Fury has blown another exhaust centre gasket & I really can't be bothered with keep changing them. Anyway, last weekend - another early start & a noisy trip through the new tunnel with wingmen Mango & AKAKeith. We set off at a cracking pace, but as I'd been awake with a steaming headache since 02:00 & had partaken of some serious pain killers, I was struggling a little withe the pace. It was after a certain amount of confusion around the turning point at Wantage, that I found myself following Mango again, he pulled over to take a cracking picture, then once again we set off in hot persuit, however we got seperated after another sat-nav dilema & then the phone went. 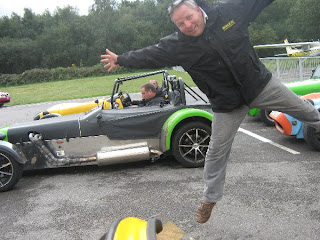 Mr Mango was just off the A4 with a very dead car. This was a bit of a disaster for him as he was booked to go on a club run to France the following weekend. He has a spare engine, but in spite of heroic efforts it was not to be. I carried on to the breakfast stop & initially thought I'd got there just after the rest of the SKCC, but it was just theat the queue for placing orders was dreadfully slow.
Posted by BlatterBeast at 17:51