I was woken by the alarm & nearly drifted back off - but no! Be firm - it's a blatt day.

This morning we would be breakfasting in Bourton. I arrived at Newlands Corner to find one Elise & one Ferrari, then GB & Roger arrived in their Elises, then naturally the local man, Guy arrive last. I was a little confused as those first two weren't coming with us - but whatever.

The route had been re-routed to avoid the ludicrous 30 limit on the "Pirbright Triangle" & the Farnborough Air Show road closures & we headed out north west. 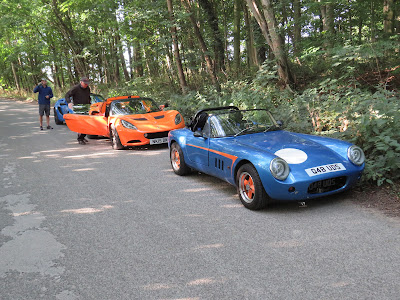 After about 20 miles Roger dropped out feeling poorly - we've heard from him since & he's OK now. But just as he turned for home the roads got much better - no really - I know we always say that, but today it was true.

The route was good & had the usual amount of turning the wrong way (me, twice), getting split up & re-forming & we arrived at Bourton-on-the Water at about 9:50. The cafe wasn't supposed to open until 10:30, but open it was & we were offered a seat outside because some cyclists hadn't arrived (lets face it if a bunch of people who'd been cycling in this heat pitched up, you wouldn't put them in an enclosed space). After a while Linda arrived & we ordered our breakfast - which was very good indeed, we sat & chatted, pulled faces at any electric cars that went past & generally did Rogue's stuff.

Then we said our goodbyes & headed back. Having re-routed to avoid the Farnborough Air Show which hadn't yet started, we then drove along the boundary fence at RAF Fairford where the Royal International Ait Tatoo (R.I.A.T.) was on! Fortunately, there was little traffic apart from a few folk parked up to look over the fence. We were over-flown by the Frecci Tricolori (Italian Red Arrows) & I managed to get a picture.