Once again it seems to be a while since I contributed here. Since the last entry I met with some success & hit some more problems.

The new Idle Speed Control Valve didn't fix the fast idle, but mounting it the other way up did, it seems I'd put the inlet / outlet holes the wrong way round - in my defence, when it's mounted on the Focus manifold it points sideways, will fit space & wire length wise either way round & in contravention of good engineering practice, can be fitted pointing either way, so I had nothing to go on when I designed the mounting plate - of course the "Haynes-book-of-lies" was no help because I have a Focus part & the Escort ISCV in the manual is completely different.

Mounting the ISCV the other way up cured the problem - but inevitably led to another - namely that the valve now pointed upwards & the bonnet wasn't going to shut. I re-designed the mounting plate with the airways reversed & set the 3D printer going again, after a day & a half something wasn't right - the print had a "fault line", it had started printing 3mm to the left. DISASTER.

I re-started it, this time (after a day & a half) it offset the print to the right!

I abandoned the 3D print file made with – in theory – superior slicing software & re-made it using the software that came with the printer, by now I was getting very short of black printing filament, but two days later I had my finished part & it worked. 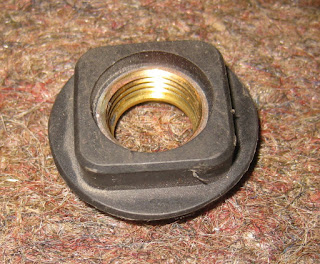 Another problem I was still to resolve last time was the Intake Air Temperature sensor - it had been screwed into the intake duct - but that wouldn't fit, I toyed with ideas like cutting a hole in the new duct - but as it has a wire coil moulded in, that was going to get messy, I thought of drilling the Mass Air Flow sensor body, but it's a carefully designed venturi that relies on airspeed over the sensor, putting another obstruction in the way would mess the reading RIGHT up. Then I was "struck by the bleedin' obvious" & cut the hard plastic & brass mounting out of the soft plastic duct, drilled a hole in the air filter centre cone (where it's solid) & used polyurethane adhesive to stick the mounting there. It’s in the airflow without disturbing it, it can't get sucked into the duct & it's easily replaceable. 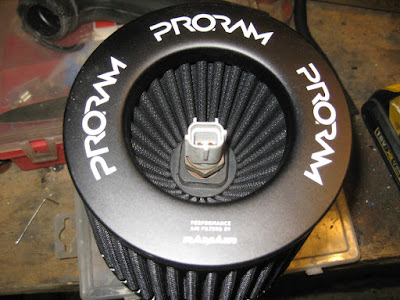 I assembled the radiator & made cooling pipes outof left-over bits of Escort, Focus & Fiesta, jury-rigging the cooling fan switch into the end of a cut-off branch pipe with a jubilee clip, filled the system with water & started the engine. It idled beautifully - but - the alternator light stayed on, the engine refused to rev above idle & when I turne the key off, it refused to be stopped. not the caughing & spluttering "running on" of a carb / distributor engine with a problem, but perfectly normal running.

I checked all the wiring to the alternator & even replaced it - the light stayed resolutely on. I turned my attention to the non-stopping & thought that as I’d put relays on both the fuel pump & ECU feeds, maybe just the power coming up the line from the alt light bulb was enough to hold the relays closed, I did some re-wiring - & it made no difference, but it didn't always do it. After a lot of faffing I noticed the warning light for the rear fogs was on with ignition & then found there was 5 volts in the earth line. Not the earths for the things on the centre console - I'd fitted them & made sure of a proper earth, but the original car loom was only earthing through the rear fog light bulbs. I fixed that - cutting another 10 yards of wiring out of the car in the process. I've come to the conclusion that the original builder crocheted the car from electrical wiring, then put glass fibre round the outside at the end.

Last weekend a chap from the SKCC bought a proper industrial fault code reader round as neither of mine could connect to the ECU, his couldn't either, but he applied some wizardry & over-rode some functions & eventually computer found computer. There were no fault codes, which was kind of good because it meant the wiring was all OK. We started the engine & I demonstrated the strangeness with the revving ie with the air duct & Mass Air Flow meter in place, it refused to rev, disconnect the MAF & it spluttered & died, BUT - leave the MAF electrically connected & remove the air duct (so there's no flow through the MAF) & the engine will rev. The warmer it got the better it reved until it was very nearly normal - even with the MAF in line, the next problem was that my jury-rigged temp switch mounting was too far from the flow of hot water & when the engine got to 117 deg C (yes - A HUNDRED AND SEVENTEEN) we pulled the plug & put a wire across the terminals, the fan came on & the engine dropped to normal in about 30sec (it was BLOODY cold out there).

What did I learn?

The ECU is wired correctly & all the sensors are sending signals.

Even running big revs at 117C there was no oil smoke from the sump breather so the engine seems to be in top condition.

When it runs well, it runs really well, so there's just a fault to find somewhere.

So I have some jobs to be getting on with. Today I've taken the alternator to the shop it came from (Burghfield Starters & Alternators - highly recommended) where the nice man confirmed it's working but told me I'd had the alt light wire going to the wrong terminal (DOH! - I photographed it before I took it off the old engine where it was working just fine) so the alt light now goes out. I've removed the radiator & top hose as I need to get a hose joiner with a proper mounting for the fan switch & improve some of the hose routes. I also fixed a small leak or two & now need to wrap the rest of the engine bay wiring loom nicely & make a couple of small electrical changes. I've started tiddivating the dash, so it won't be too long before it's ready for the road, but at the moment I have no work, so I won't be taxing the car until next month at the earliest (sigh).