MARRIAGE
One session with the mediator & an appointment with a solicitor in the diary.

CAR
Tintop - Cactus seen & approved awaiting word from the garage that it's been serviced.
Fury - lots of minor jobs done while I've been on "gardening leave". 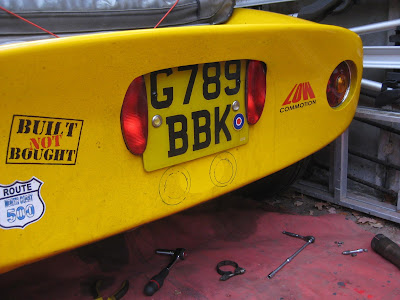 I'll just expand on the Fury stuff as that's why you're reading this. When I moved the exhaust exit to the rear of the car I had intended to take the tail pipes out through the bodywork, in the event I chickened out & put them though an existing hole in the rear valence. I now took a brave pill & cut the holes where they were always meant to be.

Having marked roughly where they needed to be I started cutting. 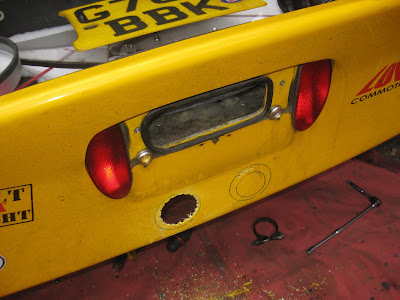 Chain drilling the holes & then dremelling out to size showed that the tail pipes would be pointing upwards, so I shortened the pipe in the wheelarch & the strap that holds the last exhaust section to move the pipe upwards & they came out pretty much spot on, but chattered on the body, so the next stage was to dremel the holes bigger & put rubber trim round them & all is now good. 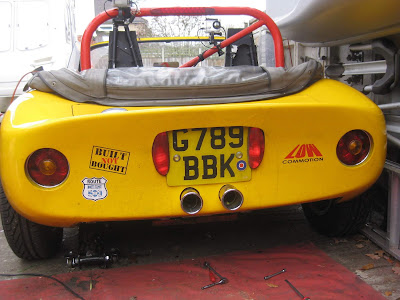 This picture is pre-enlargement, but you get the idea of how it looks.

That under the left hand side is not a wheely caster, it's the trolley jack.

I wasn't convinced to begin with, thinking it was a bit "Max Power" but I've got used to it now. 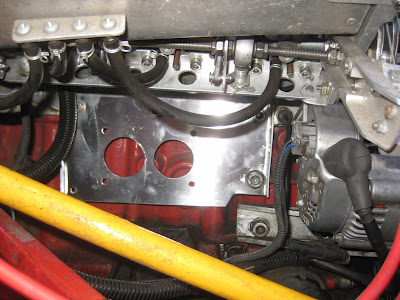 The other things I've been up to are all about disguising it's age. On the Zetec the plug leads all sit in a "valley" in the cam cover with the coil pack at the back of the engine, this is all very neat & tidy, but also very modern, so I bought a set of plug leads without the coil ends "made off", made up a plate to sit below the inlet manifold & ran the new (RED) leads to the now hidden coil pack, giving the impression there's a distributer under there somewhere. 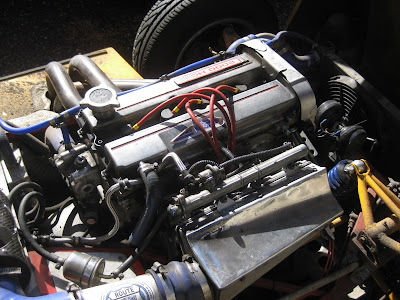 Mounting the coil pack on an aluminium plate allows me to dispose of the large steel mounting bracket & three M6 bolts at the back of the engine, saving a little weight & cleaning it up visually, as a bonus the wiring run to the coil pack is now all hidden as well.

You'd now have to be something of an expert on Ford engines to know it's a Zetec, most of the clues have gone. 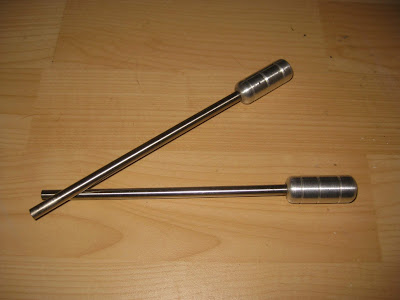 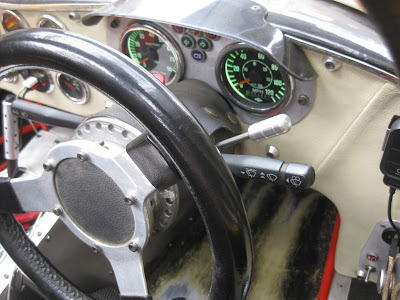 On the same subject, about the only thing in the cockpit to give the game away (apart from the many many USB ports) are the Sierra stalk switches.

Some time ago someone was selling stainless stalks to replace the Sierra plastic ones, they looked nice but they were just "dumb" stalks, so you needed to add dash switches for hooter & screen wash. I've tried to keep the dash as free of switches as possible, so I made up a set of aluminium ends & mounted them on waffer-thin wall titanium tubing I "happened" to have.

I've bought two chrome-on-brass, waterproof (allegedly) momentary switches & when they arrive I'll machine the alloy ends to take the switches, run the wired through the tube & bob is your uncle.

The smaller light stalk has no switches, so that one's fitted already.
Posted by BlatterBeast at 13:10