The GoPro & The Yogurt Pot

With the “graceful degradation” of the BlattCam, I’d been considering my options & had kind of decided on a GoPro as a combined Christmas & birthday present but as ever with me, there were complications. The current GoPro Hero3 is all fine & dandy, but uses the micro SD cards. Nothing wrong with that as such, but they are fiddly to change & easy to lose. The previous generation GoPro Hero 2 uses the postage-stamp sized cards which I already had a number of.


My conundrum was decided when a barely used Hero2 appeared for sale with the WiFi remote in nearby Weybridge. I put in an offer, the owner accepted it, he saved on PayPal fees, I saved on price.


The GoPro is undoubtedly an excellent piece of kit, but there’s one or two aspects that don’t work terribly well when used on a road trip. The principle one being the need to get a power wire & mic line into the waterproof case, which naturally renders it – not waterproof at all.
The “proof” bit of waterproof wasn’t too important, if the car gets submerged, having footage of the event won’t be my principle concern, but I was bothered that rain would enter through the holes drilled for wires & accumulate in the case. Which would prove expensive. I’d seen instructions on the interweb for modifying a USB lead such that it fitted within the case, the wires themselves could then come out via a hole in the removable door. Swapping to an alternative door would make the case watertight again.
Excellent! I tried it, it didn't work. 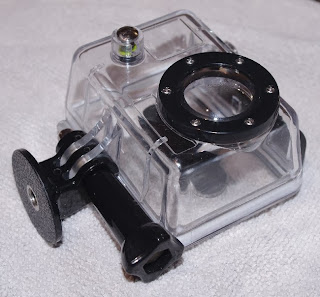 The only alternative was a large hole in the side of the case, but all was not lost, as a second-hand case with a scratched lens came up on Ebay, which I bought for £not-much-at-all. I could cut this one about & keep the watertight one for scuba diving off the Maldives (one can but hope).
I was still concerned that rain would enter the case though & looked at various ways of making a shield, including gluing a 35mm film pot to the side. After a few options were dismissed, I hit upon the following. 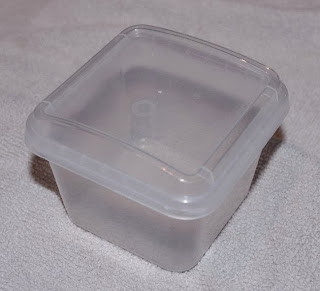 This is a yogurt pot. Being the preferred variety of my elder daughter, it is of course the expensive type. You can tell by the sturdy nature of the pot. No cheap polystyrene & foil lid here. 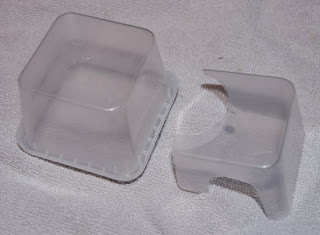 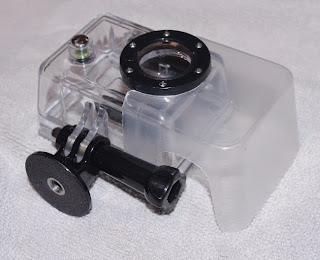 ......... and this is what it looks like selotaped to the case. When I drill the case for the wiring, I’ll attach the shield with double sided foam “servo tape”, which should be strong enough to keep it attached at Oh – 70mph, & seal well enough that any rain gets carried past the opening in the side. 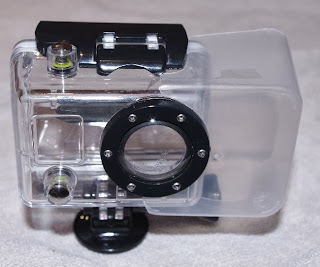 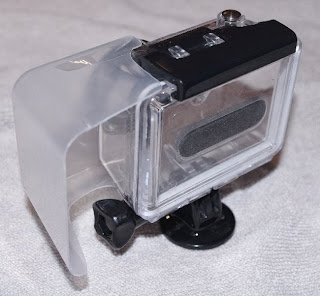