I've been looking at GoPro mounts as I'm getting one for Christmas. A guy in the SKCC makes superb videos & extolls the virtue of alternate camera angles. This is great if you're Top Gear & have a dozen cameras to festoon a car with, I will just have the one, but I thought I might make the most of what I have with some mounts to put the camera in places you might not expect. 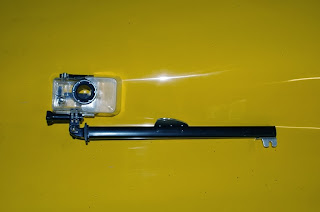 To this end I started sketching & through a few iterations & experiments came up with  a mount on the back of the passenger headrest (not that unusual a view), one in the radiator intake & I wanted one low down at the side of the car. After grubbing about in the garage I came up with this.

What it is, is the bottom section of one leg of a tripod, with the screw & foot removed & replaced by a 1/4 Whitworth bolt, which is shortened & has a GoPro tripod mount fitted. 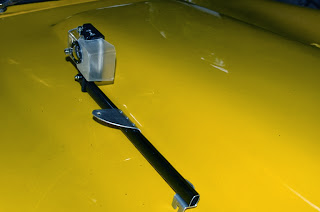 There are also a couple of brackets made from aluminium off-cuts pop-riveted on (riveted in two planes - the brackets wrap round). just to ensure I retain ownership of the GoPro, the tripod mount is wired to the leg which means that neither the push-in end can fall out, nor the tripod mount can unscrew. 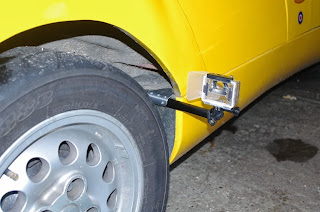 This item can be attached to the car by two existing bolts holding the rear of the driver's side pod on. I did think of fitting it to the passenger side, to get dramatic footage of exhaust & undergrowth rushing past, but thought better of it when I realised just how close the undergrowth would be.


So here it is installed. All I need now is a camera to put in the case. Roll on January.
Posted by BlatterBeast at 17:13