The old one was OK, it worked fine - but it wasn't adjustable & it was in danger of getting kicked & wet, so I gave it some thought & while e-baying "brake light switch" I kept getting motorcycle ones coming up. This was irritating because I didn't want a motorcy .......... wait a minute! 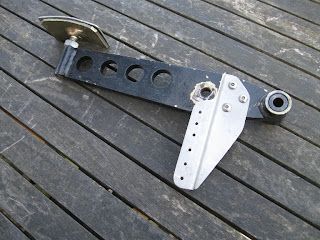 The problem with the switch stems from the pedal being floor mounted, the vast majority of car pedals are top mounted, so there is a little extra pedal above the pivot which trips a plunger switch. To use that type on the fury would mean the switch being in the same place as my foot. The bike ones offered an entirely different set of options with the switch being "pull for on", so I made up a lever & bolted it to the brake pedal (making sure it didn't foul anything). It's also made of very thin aluminium so it will just bend out of the way if something gets under it.

The next job was to mount the switch itself. Easy enough as it's a cylindrical thing with a thread on the end & some waterproofing. My lever was mounted in such a way that the switch could be fitted to a hole in the top of the pedal box, I'd cut the pedal box lid to fit around it. 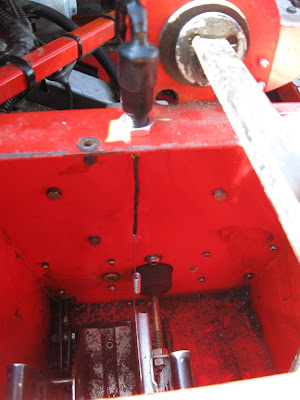 You can see the switch at the top (to the left of the steering column) & the link wire & spring running down to the lever arm just visible at the bottom, nicely to one side of the brake rod. It's all tested & works after about 1/4" of pedal movement, which is fine. The reason I got this opportunity is that I arrived at work yester-morning, to find the boss man standing on the doorstep. It seems there'd been something of a flood over the weekend & there was to be no getting in to the place. So - yesterday & today off - tomorrow still to be confirmed. I would be messing with the ECU program again, but while testing the brake lights I managed to forget the ignition was on & flattened the battery, so as it's 21.5c, I shall sit in the sun - hoorah!
Posted by BlatterBeast at 16:35