Finally got out on another blat - just a short one round western Surrey. 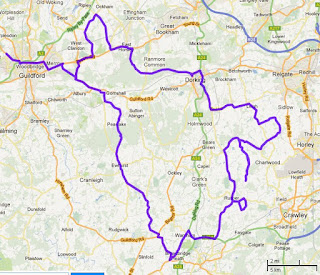 The last two attempts were thwarted, firstly by the car refusing to start - my own fault, I'd been adjusting the headlights, which needed them on for quite a while, then to check the battery was OK I started the engine, then satisfied, I left it for a week & went to Chester. Of course starting the engine had used the last of the battery. The second fail was my own decision as my wife was tending to the damned 'orse, so I chose to stay at home to provide some parental attention for daughter the younger - & indeed we had a reasonably pleasant morning getting her homework sorted & suchlikes.

So, back at the point. It was to be a short, very local & roughly Africa shaped blat, Newlands back to Newlands, only 58 miles. 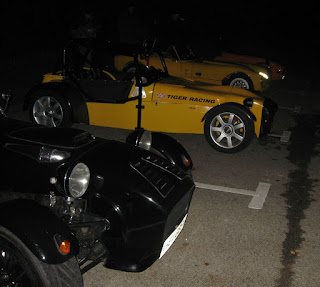 The meet time was set for 07:00, I set off from home & arrived at the departure gate thinking "surely that's not SNOW??" GB was already there & within a few minutes three other blatters had rolled up - without exception, as they dismounted they said "surely that's not SNOW??". It was, only a very light flurry or two & certainly nothing to stop us heading out. But at his time on the last morning of British Summer Time it was still DARK, the sky had begun to lighten, but basically it was DARK. So we rolled down the long hill in loose formation, testing the tarmac for grip & wetness. The first stop was the lights on the A246. Five fast cars, an empty dual carriageway, traffic lights on red. This was only ever going to go one way. After the opportunity to "arrange the cars in speed order", we took to the lanes, I was running second at this point, I don't like leading because I ALWAYS mis-read the sat-nav. But when the lead car went straight on when my route pointed left, I ended up leading anyway - briefly - because after about three miles I did exactly the same thing, dumping myself back to the tail-gunner position.


There were the usual SKCC "events", we rounded a fast corner, to find a Tractor cutting a hedge & COMPLETELY blocking the road - at 07:30 on a dark Saturday morning, but by dint of quick reactions & good brakes, disaster was averted & I reversed back round the corner with hazards a flashing in case anyone else should happen along, the tractor driver kindly pulled over & off we went waving our thanks.
Apart from another Sat-nav induced formation turn around (on the map above you can see it to the north of "Madagascar") we had a good blat. Very little traffic, good (if bumpy at times) roads, but VERY cold. Unusually we all managed to keep together in a group, & arrived to park up in formation back at Newlands just as the food shack was opening - Hurrah. As this is very much an outdoors type establishment, there are no plates or cutlery, so I indulged in cheeseburger & chips, with the largest coffee they could manage - I wasn't thirsty, I wanted it as a makeshift hot water bottle.
As we stood about bantering about the run & being disparaging about almost anyone who wasn't there (as you do) some of the gentlemen of the Surrey Constabulary - having quaffed their hot beverages - ambled past, nodded at the roofless & mostly screenless cars & said "bit cold for that isn't it?" "No" I answered, shuffling into the watery early sun, "at seven o'clock this morning it was quite cold for this, now it's quite pleasant."
To prove the point I took the Fury up the A3 to my brother's house in the afternoon, so that counts as a good day in my book.
Posted by BlatterBeast at 09:53