Marmite Toast Is No Substitute

Wa? ........ Wassat? ........ Wa - alarm, oh yes blatting. 05:20 is no time to wake up - unless there's something to wake up for. I had allowed myself 20 mins to get up, dressed & up the road. I was ready in 15.
Mr Mango had suggested he might join me for the run across to Sevenoaks, so I loitered in the garden feeling the early morning stillness, listening to the doves cooing & such, but at the allotted departure time I had not seen or heard from him, so set off solo.

I would've gone cross country, but a cycle race in practise for the Olympics meant the roads were closed, so I chugged along the M25, which was dull, but got me to the meet point just as a guy in a Cateringvan R300 arrived. Over the next few minutes reverberating roars & snorts heralded the arrival of SKCC members, among them Matt who I'd given a test ride to a couple of weeks back in his newly purchased Tiger. We numbered about nine or ten, with another two due to meet up on route. 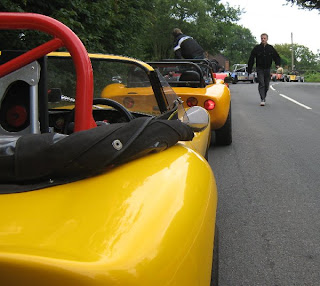 This was the Fury's first blatting venture to the east, & the roads were top notch, twisty & undulating with little traffic. However dear reader, this story has a tragic ending (OK, maybe a bit sad rather than actually tragic). Before I reveal all, let me take you back to 2003(ish), the last time I did the London to Brighton cycle ride. It was at the top of Turner's Hill that my bike lost drive because one of the cranks came off, I pushed it to Ardingly service point, but the floppy-haired Halfords folk in attendance had no idea what a crank bolt was, let alone provide same. 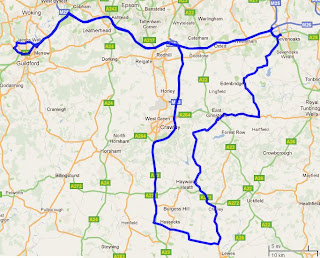 This was all flooding back as we drove that particular road this morning, & shortly afterwards fate struck again. This time the nipple at the lower end of the clutch cable parted from the fork, leaving the pedal up against the bulkhead. There was nothing to be done. A couple of co-blatters (Mango & Bi22le) came back to see if they could help, but with a theatrical swoon I said "no - just leave me - I'll only slow you down" (actually, no I didn't). Fortunatly we were just off the A23, so once turned round & with a bit of a push I got the car started in 1st & changed up to 2nd clutchless, & so on. As long as I didn't have to stop I'd be fine. And so it was, again I chugged along the motorway, ending up back at home - & ravenous, I'd been looking forward to my full English - about the same time as the rest of the assembled crew were tucking into their "healthy option" breakfast.
Oh well. there's always next time.
Posted by BlatterBeast at 14:12