The day begins well when one of our number appears outside. Yesterday he broke a driveshaft & was trailered home to Derby, but having tucked the car up in its garage, he returned with his tin-top – well played that man, also in the arrivals was our one Scottish member, with us today from Dumfries to Oban before returning home to Paisley. 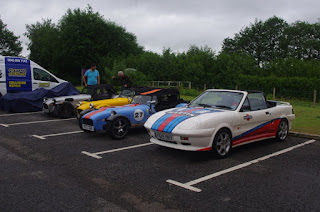 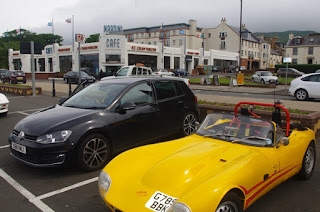 So after a hearty breakfast served by a not-very-genial waiter we packed up & left. Almost straight away we were on a fantastic road, constantly twisting & testing the cars – after the Discovery turned off anyway. The road went on for mile after mile with no traffic. After that we headed through Girvan & Ayr before going inland again to the smaller roads & the back way into Largs – a place I frequented in my early twenties. We stopped for a coffee & an excellent ice cream at Nardini’s before moving on to the Old Largs Road a single track across the moor to Greenock, then the Erskine Bridge & after a confusing time with the SatNav we headed again inland, more or less together, past Loch Lomond & then off the direct route to anywhere to find some brilliantly entertaining roads. The sort of roads where you can’t actually break the speed limit. Some of the locals were up for a play as well, one Range Rover was stupidly hard to keep up with considering it’s weight. And so eventually to Oban & the coast road up to Ft William where we would be spending the night. 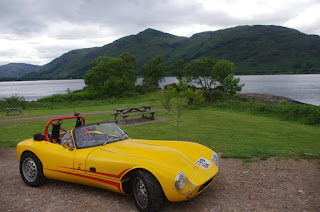 The guy with the tin-top who had easily kept up all day came over the radio to say I had something wet running out of the back of the car. About this time I started smelling petrol so we pulled into a fortuitous petrol station where I noticed the trail of fuel I’d left across the forecourt. Laying under the car it was everywhere, when the ignition was switched on it fountained out of the fuel pump, but turned out to be a slightly loose clamp (it’s been tight enough for the past year) had been slid away from the outlet by the “G” the Fury was pulling in the turns. A quick bit of spannering & a re-fuel & it was fixed. 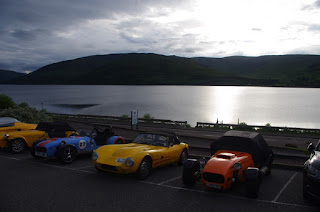 So on to Ft William, where there was a terrible drought - they had had no rain for almost twelve hours! We parked in a row outside the Clan McDuff hotel & ate our tea as the sun went down over the cars & the islands.
Posted by BlatterBeast at 18:12