When the Fury was built I got a "low tone" hooter for it, disappointingly it produced more of a squeak, what I wanted was more of a bellow. On the last trip out I realised the hooter was no longer squeaking, so I scoured Ebay & found a pair of Lucas horns, one "low tone" & one "high tone". A brief test suggested "OI - GET OUT OF THE WAY" whereas the old hooter suggested "excuse me - I'm over here" But mounting them proved to be troublesome. Obviously I wanted them together for the artistic effect, but everywhere I tried to fit them was just a little too small, one would fit, but not both. Until that is, my eyes fell on an offcut from the clutch beam. I cut a shape to fit to the central tube upright on the chassis & to go around the upper cross tube, the hooters would fit on the flanges - like this:- 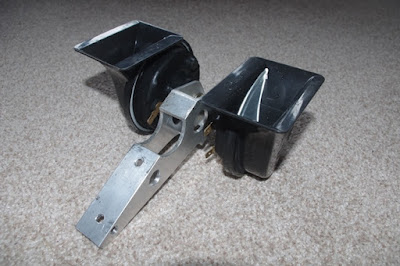 The flange you can see bottom left will bolt to the car through the two 5mm holes. I've fitted rivnuts to the chassis so I just need to do some wiring & bolt them on 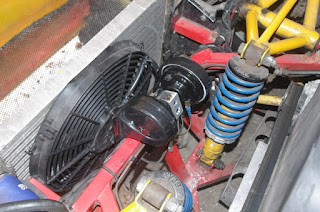 UPDATE:-
The hooters are now fitted with a couple of 5mm titanium bolts & all wired up. Parp parp they go instead of eee eee. This is a good thing. 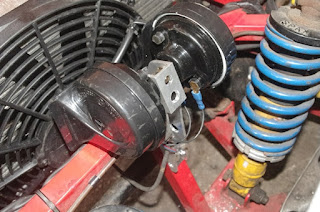