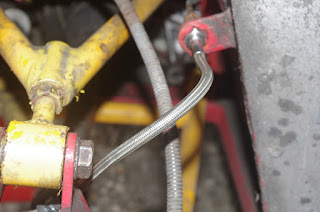 After last Fridays exciting event (the brakes failed) I called Fury Sports Cars & Steve sent me a new hose. Like a lot of things since he took over, this seems to be better quality - it's all stainless, but the design has changed, it now has a 90deg fitting at the wheel end which made it more difficult to route. I fitted it into the lower port on the slave cylinder & swapped the bleed nipple to the upper one to make it easier to bleed - that wasn't possible with the old hose.

﻿﻿ While I had the wheel out I added one turn of camber to both rear wheels, this was suggested at the limits day last week after the Fury showed a tendency to oversteer into corners. I also turned up the front shocks by a couple of clicks.
﻿
Then it was just a case of bleeding the rear brakes through & I took it round to Sainsburys to check the tyre pressures (15psi all round, should be 17) & I have to say it did feel more planted, not much to go on admittedly, I might get a chance for a fuller appraisal tomorrow. I think it may need one more turn﻿﻿ to give it a little more camber, but pleased with the results so far