Ever since I started building the Fury it was my intention that there shouls be a little bit od Hot Rod & a little but of aeroplane in it. Regular readers will know that there are several bits of aeroplane used in the car - not there to be flash or ornamental, just when I had something that was of genuine use. One thing it hadn't had was a thing I'd noticed on Ebay from time to time but never had spare money for. 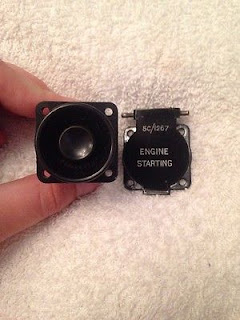 Well, I decided I'd waited long enough & bought one. It's a starter button to a standard Air Ministry pattern as used in Spitfires, Hurricanes, Lancasters & probably every other plane of that vintage.

It's a shrouded button with a sprung - lift up flap, so you don't hit the starter by accident (I had hit the old starter button unintentionally once or twice, it certainly makes you jump!).

Today I had a day off work as I'd built up too many hours & one of my jobs was to get this fitted.

The starter panel came out of the car easier than I was expecting & the fuel pump stitch & alarm light came off easy enough as did the old start stitch - I say "old" but it's probably at least 50 years younger than the "new" one - then it was just a case of opening out the hole, drilling four small bolt holes & re-assembling - simple. 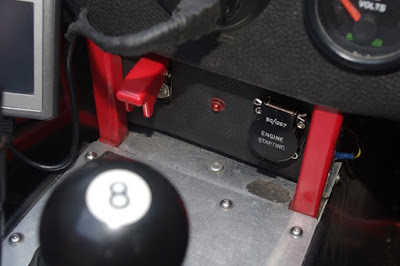 And in answer to the inevitable question - no I'm NOT going to fit an altimeter - that would just be silly.
Posted by BlatterBeast at 18:20