On the past couple of runs I've been impressed by the Daytime Running Lights (DRLs) on the following car. I was very sceptical of DRLs at first & still don't understand why we need DRLs & side lights, but I decided I wanted DRLs on the Fury to help with visibility after having to hit the hooter three times in a single journey after folk failed to see the vivid yellow red & black car. 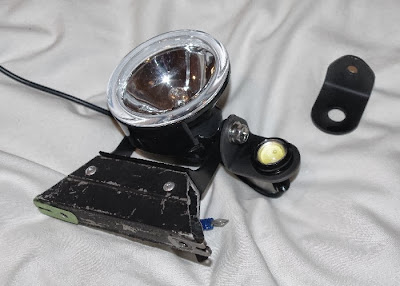 But Where to fit them? Most of what E-bay had to offer were light units which would fit into the multi-holed frontage of a modern car, but would look pretty stupid on the Fury. I considered moving the indicators inside the light covers & fitting something in place of the Lucas units, but I could find nothing I liked the look of. But I did find a simple 1" dia 3w LED in an alloy body.

So today on getting home, I made a couple of simple alloy brackets which would fit the DRLs just below the spot lights in the grille. The spots sit a way inside the grille with black painted brackets so they appear to float, the DRLs will sit further back still & in the shadow of the spot so they shouldn't show up unless the light is on - that's the theory anyway. 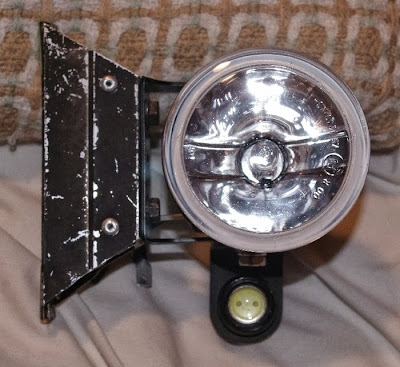 So far so good.

Tomorrow I'll blow over the bracket with some matt black, re-fit the lamps & start on the wiring.

The DRLs need to be wired into the ignition so they come on with the engine, but they need to go out when the side lights are on, so there will be a "normally closed" relay, switched to open by the side-light circuit.