It's All About The Car

The Fisher Fury.
Much has been written about the Fury, none of it bad. It was designed by a clever man called Jeremy Phillips, unusual in that he designs great chassis AND wonderfully attractive bodyshells. Usually with kit cars you get one or the other. The story of the Fury really begins with a car called the Sylva Striker, JP’s third(ish) design, the Striker looks rather like a Lotus / Caterham seven, in that it’s a front/mid engined minimalist car with a flat screen & cycle wings at the front, it is not a replica in any way though & Strikers are very easily distinguishable from seven “clones”.

The striker was an immediate success on the race track & in specialised kit car races Strikers or their derivatives generally make up ½ the grid - & as often as not all of the podium. With a winning car, the obvious next step was to improve the aerodynamics, so the Striker Mk4 later re-named the Phoenix gained a full body in the style of the late ‘50s racers – again not a replica. The Phoenix as designed by JP has no screen & no doors, but customers were asking if they could be fitted, so after another re-design, the Fury was born, named after the Hawker Fury. After a few years the project was sold on to Mark Fisher to become the Fisher Fury. Mark developed the car further adding the Sierra based IRS version that I built.

My Fury
When I decided to build another car in 2003, I started by looking at seven replicas, but a colleague at work had a Tiger, & she found it difficult to breath above 40mph because of the partial vacuum behind the screen. Another colleague had also driven it & found his glasses had wanted to fly off at a similar speed. So I started looking at cars with curved screens.

My first thought was a GTM Libra, all GRP monocoque with a mid-mounted Rover K series, very good styling & exquisite engineering, but when I did the sums it was going to cost more to build out of an old Metro using the donor car’s wheels seats & engine, than my wife’s Zafira cost, brand new, delivered on the back of a lorry. I couldn’t justify that, so I looked again. A friend had built a Sylva Stylus some years previously, the Stylus is a further developed more civilised version of the Fury, but in the mean time the manufacturer had moved to mid Wales & as I’d need at least five trips with a van to deliver & pick up parts, that was a substantial additional cost, so Fury it was.

Having bought a donor Sierra for £300 I stripped it & had the shell scrapped, fitted the 2.0 pinto engine in my Rickman Ranger, & cleaned up all the other parts including the Ranger’s X-flow engine ready for fitting in the Fury.

Picking up the chassis was a big day, with all sorts of hassles including getting lost on the way, almost being late to collect it, the two motorways we needed to get home being closed by accidents, but after having to stop for tea in a pub, we got the chassis home & installed in the garage. The first job was panelling the chassis with aluminium sheet, a chore for some builders, but I’m an ex-aircraft fitter so this was like coming home, & I thoroughly enjoyed it & made a few improvements as I went along. All the panels got etch primer, top coat & were wet assembled, so it should all last well. 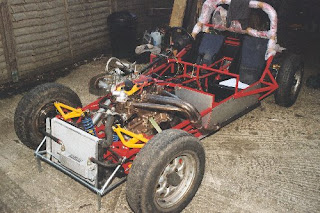 Next was the suspension with the few Sierra parts being fully refurbished, so then I could fit the wheels & make the car mobile, next came steering, new brakes, & I started the plumbing with the brake & fuel lines, again my apprenticeship making it easy & enjoyable, then with my daughter’s help, I filled the brakes with fluid, bled them down & the car started to come to life.

Gearbox next – the top lid needed trimming to fit in the chassis – odd as it’s the gearbox the car was designed for. Next to go in was the engine, then out, then back in, then out while various clearance, routes & fittings were checked & adjusted. Next was the transmission tunnel, with a few mods to make it nice & flat, & with the front sides & rear top removable for access, I was happy to leave it in bare aluminium. The engine controls started lacing their way through the car, I modified the throttle pedal to make the pivot action smoother, joined up the clutch – after cutting a BIG hole in the RS2000 aluminium bell housing, then fitted the carbs with twin throttle cables, the radiator, & the fuel tank. I was told I’d need stainless straps for the fuel tank, but some stress calculations showed that aluminium would be strong enough, so I had the numbers checked by a tame stressman at work & went ahead. With a car with a 100bhp engine, weight is the enemy.

So it was about time I ordered the bodyshell. I’d decided on YELLOW as the car would be very small & low, so I wanted the other traffic to have the best possible chance of seeing me coming. I also wanted doors as the friend who’d built the Stylus hadn’t fitted a soft top, so could only drive it under clear blue skies, I wanted to be able to take it to work. I drove to the factory in an un-airconditioned van on the hottest day of the year, picked up the body, dash top panel & fuel filler cap & headed for home – the shell wouldn’t go on. I took off the steering column & tried again, better but it was still rocking on the side impact bars. I called the factory to be told I was the first person to try fitting a shell with doors to a chassis with side impact protection. After a lot of trimming & faffing I got it all to fit – sort of properly – at least as good as any other unpainted Fury I’ve seen. The other major problem was the bonnet which wouldn’t close over the carbs – annoying because the enormous hump in the bonnet was there to accommodate them, a lower manifold, shorter trumpets & a cut-down throttle linkage eventually got it within the confines of the body.

On to the electrics – oh joy! Actually it went rather well, the Premier Wiring loom was delivered to my door by the man that made it & it too started snaking it’s way round the car. Most Furys have a large grommet in the firewall with the wires splaying out from there, I decided to run them down into the offside pod, & round the chassis keeping them as far out of sight as possible, it’s made for a much tidier engine bay. Component by component the car came to life, only costing me two extra packets of fuses & eventually it was time to fire up the engine. First there was no oil pressure, when I fixed that there was no fuel, after that it still wouldn’t start. I re-fitted the old downdraught carb, & after a fair amount of cranking it fired & I was able to drive it – sort of – back into the garage, a wonderful feeling, but there were still lots of problems & when I swapped back to the twin Dellortos, it still wouldn’t run. After a LOT of faffing & messing about I did get it running on the 40s, little by little it improved & to the point where it was a joy to hear them gulping down air when driving it.

The SVA test rules state that there must be a way of de-misting the windscreen, so I bought a Mini heater off E-bay, then I decided it would be far too heavy, so I bought two “caravan heaters” like 12v hair driers that at best wheeze tepid air at a marginal rate. I tested them - both were fine, I fitted them & tested them in situ, only one worked, I ordered another – it was a different shape when it arrived, I made it fit anyway, then the second one of the first pair started smoking when I tested it! They both got dumped & I was going to go back to the Mini heater when a guy in Leatherhead advertised an electrically heated screen on E-bay. He’d wanted one but had to have a batch of ten made, so I bought one off him for the same price as a conventional screen & all was well.

With the screen bonded in it was almost SVA time, but the SVA requirement that the headlights be at least 500mm from the road wasn’t achievable, so I made up a pair of steel “hanging basket” brackets that took podded headlights & winkers in baked bean tins. It looked ridiculous but complied with the regs. So six years had past & it was time for the SVA, the test was as much about me & my engineering as it was about the car. My Brother followed me round the M25 to the testing station & the examiner started to climb over it. I was convinced it would fail, not least because every time I switched the engine off there was a pause ……… and then BANG! But it passed the emissions test, the speedo needed adjustment which I did on the fly while the examiner held the throttle down, there were no problems with edges or cockpit intrusions, one podded light needed re-aiming, but he was happy with the braking the noise & the mirror aim, so that was it – a first time pass with my first kit car. Happy doesn’t begin to describe it.

I got the car set up on a rolling road & the suspension professionally aligned, both of which improved the car a great deal, I changed the dash, & re-mounted the head & tail lights & for the next three years really just drove it. Until that is I was made redundant & set about the Zetec swap, but that's all documented in the blog. Suffice to say here that it is now MUCH quicker while retaining the exquisite handling it had before.