I was awake at 05:00 - WHY do I keep doing that? But I did some internetting to find somewhere that could change the wheel bearing on the Stylus & eventually strolled out to the garage. I pumped up the Quantum's tyres, because today was MoT day, the first with the new engine.

I went first to my favorite nut & bolt shop to get some riv-nuts & some new bolts for the roll bar, then onto the MoT station passing - strangely - my soon to be ex-wife walking on the common. I waved a cheery middle finger (I was feeling brave as the soft top was up).

With the MoT cert in my hot little hand & still not quite believing it, I set off home & about a mile out it started to spit with rain. Half a mile out the heavens opened in proper biblical style, the car steamed up all the windows & I had to pull over & wait it out - the heater on full blast wasn't clearing it.

Back on the drive it was still raining very heavily, but I found a raincoat & put the "shower cap" on the car & went indoors. No sooner had I sat down than the doorbell rang with a Car Builder Solutions delivery. 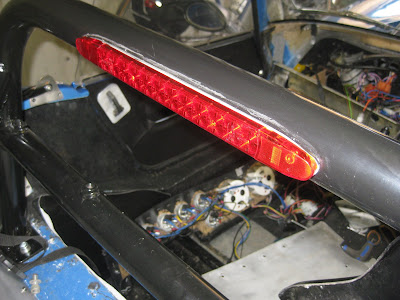 This afternoon I've been occupied fitting a high brake light to the Stylus - the third time I've done this. I've bought the same Hella LED lamp four times - the first time they only made clear, when the red ones came out I replaced it, then bought one for the Quantum & now another for the stylus. I used the same tried & tested method - Make a plate the same shape as the lamp, rivet it to the roll bar along the centreline, Fill in the gaps with Tigerseal & screw the lamp onto the plate / roll bar assembly with the red wire passing through the roll bar & the black one earthed to it 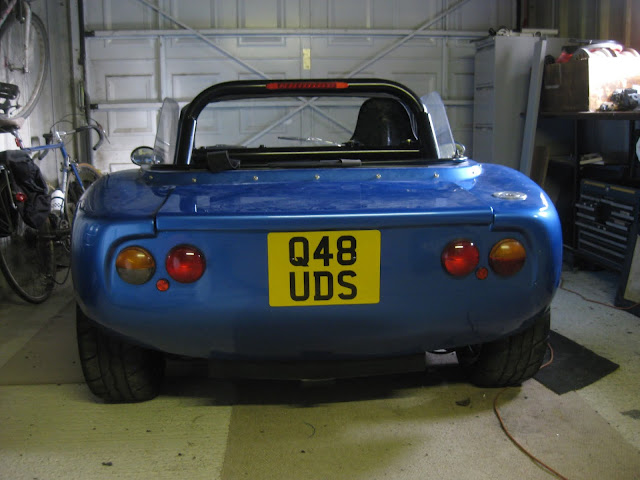