The Stylus continues to be in more & more pieces.

I discovered that the reason the seats weren't mounted propely, is that when you do mount them properly - they don't fit. I bought the roll bar back from the powdercoaters & put it in place, tried to fit a seat & the headrest hits the roll bar long before the seat is far enough back for my legs. I considered this for a while. I considered putting the Stylus seats in the Quantum to replace the Peugeot seats that are so heavy I can barely lift them & buying new saets fo the Stylus, but a quick investigation showed that was going to come in at around £1000 & I'm WAY too mean for that.

Option 2 is to cut the head restraints off the current seats, add a new GRP flange to the cut area to restore the strength & then make head restraints to atach to the roll bar. Far more "me" & almost £free which co-incidentally is one of my favourite prices.

So this morning I sauntered out to the garage to get on with this surgery & immediately got distracted by the electrics, the result of which is that I've spent all day trying to understand someone else' idea of circuit design. 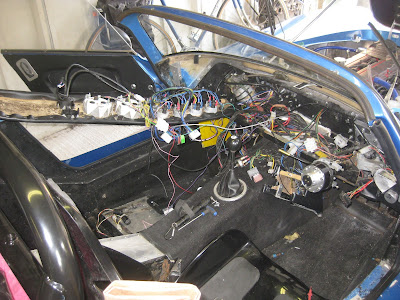 basically it boils down to "I wouldn't have done it like that". There's a permanent live running right cross the dash with a myriad connectors supplying stuff. There's a nice relay box under the bonnet with at least two unused relays, but another four relays are buried in the wiring behind the dash. There's an FIA type cut off switch in the main EARTH & some very strainge wiring.

For example, just before I came in, I was checking circuits & the screen washers had stopped working. I'd listed all the fuses earlier on, so checked the other things on the same fuse - all OK. I traced the wiring from the switch on the transmission tunnel panel to a connector block for the dash (which I'd removed) - onto the dash loom - into another connector block - back into the main loom & on to the wash pump, so it wasn't working because it was disconnected in two places it didn't need to go to.

I will deal with this tomorrow. I also tried to re-instate the wiper stalk, before I did the fix to the stalk itself, I checked the switch part was working, it was. I mended the stalk & now I come to wire it up IT'S NOT BL00DY WORKING! (Sigh)

I'll sort it out.

The basic problem is a number of owners with different ideas working on it - it needs a proper sorting out - which it's geting, but it feels like I'm not making a huge amount of progress. 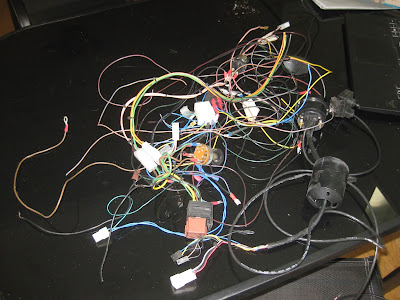 I did find the ECU was bolted to a 1/2kg alloy plate in the footwell so that got the heave-ho & I've also removed almost a kg of unecessary wiring / relays / switches / gauges, so at  least now when I look down behind the dash, I can see mostly what's there.