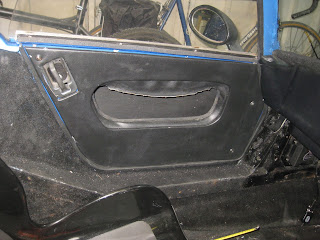 Of all the work the two kits need at the moment, re-upholstering the Stylus' driver's door is probably not the most pressing, but that's what got done today anyway.

The doors were OK(ish) the bezel round the door release on the driver's side was broken, the vinyl on the door itself was unpeeling & there was an MDF trim panel screwed - sort of - inside that. 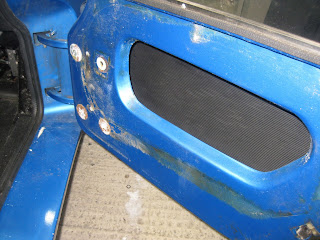 First I made a new bezel from aluminium, so that was pretty easy, then I took the door off. As I undid the last of the bolts there was a heavy sounding clank & the door came away. The clank was made by a bracing plate tying the hinge frame bars together - 6" x 4" & made of 2mm plate (appologies for the mixed units - I worked on Harriers for most on my career). I put the door back on in the hope it didn't need it, but it seemed flimsy, so I re-made it in aluminium with two flanges instead of one & two flanged lightening holes. the old fish weighing spring balance in the garage said the old one was 1/2kg while the new one failed to 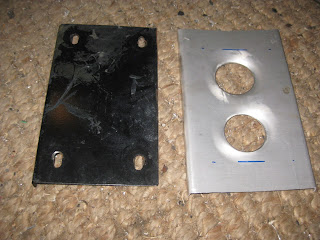 register. I also replaced the hidden but ugly bolts with titanium ones as they'll now be on show.

The next job was to cover the inner door face with new vinyl & punch through where the holes were & re-fit the door. It now doesn't need the trim panel at all, that tipped the scales at 1kg, so when I've done the other side, that'll be 3kg of mass lost in the door alone (with more to come when the heavy stainless side window supports go). Total mass reduced on the car is now 9.5kg or 21lb in old money. In the photo below the clamps are still in place while the glue cures. 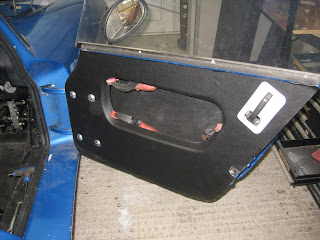 Yesterday I counted fuel filters - that might seem an odd occupation, but I realised there was a small filter in the feed pipe to the low pressure pump the car probably doesn't need (there appears to be a sump in the fuel tank), the facet LP pump has a built in filter, so that's two filters in a row. The LP pump output went into a "filter king" pressure regulator & filter combined fitted by one bolt to the centre of a sheet metal panel & the fuel then went forwards to the engine bay, to another filter - so that's another two filters in a row. From there into the swirl pot & out again through another filter & into the high pressure pump & on into the fuel rail. Note dear reader, there is no filter protecting the delicate injectors form any debris the HP pump spits out. So yestedays job was to remove the filter king as it was by far the heaviest & most badly mounted, I need to re-route the pipes at some stage to send the high pressure fuel through a filter.

Also yesterday I took the seats out & mounted them by all four mountings as they were only attached by the front two mounts which made them a little wobbly.

Every day the car gets a little better.