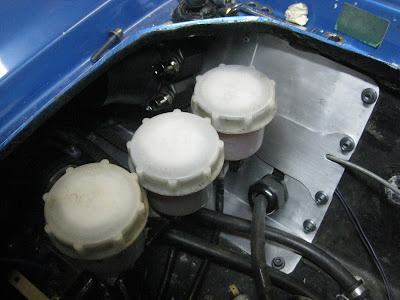 It was a bit of a nasty job, but the heater is now fitted - not plumbed in, but it's installed in the car just outboard of the hydrulic reservoirs. I'm quite pleased, the de-painted alloy panels look nice & the heater itself tucks nicely out of the way. The two halves of the mounting panel are now reasonably easy to remove, but a couple of the riv-nuts in the chassis span when I removed it. I managed to replace one, I may need to do some others, but the holes have been drilled oversize. 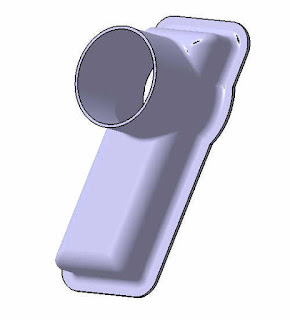 Before I was dressed this morning (yes, I know - too much information), I drew up the intake which will get bonded to one of the gill slits in the front wing, I'll print it as soon as I get some black filament. 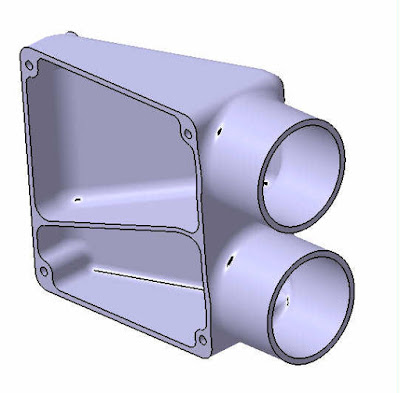 I also drew up the plenum to supply the screen vents, it's divided, with one chamber bigger than the other, this is becase every car I ever had (except the Fury) seems to de-mist the passenger side quicker than my side, so I'm hoping if most of the air goes to the driver's side it'll clear first.

The heater fan seems to be powerful enough, so fingers crossed. 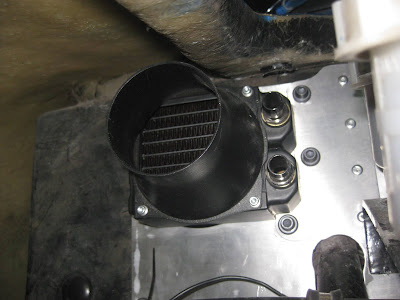 Also on the agenda today was fitting the driver's side door trim in the Quantum, which I failed to do as I need some longer bolts (on order). So I went off on a shopping trip to get bolts for the heater & pick up the Stylus' new rear No. plate (sigh).

My first mistake was ordering it from Halfords, for a start they wanted £18! They also wanted four days on account of "they only make rectagular ones" so my square one would have to be ordered in. The very next day my phone rang but I didn't get to it in time, it was an Aldershot No. so I called back & got through to an Indian lady, who wasn't in Aldershot. She couldn't get the branch to answer, but assured me she'd left a message for the manager to call me.

You know where this is going - nobody called. A few days later I was passing so I dropped in:-

"Have you bought your documents?"

"No, I showed them when I placed the order"

"I wasn't told this"

"It would have been written on the paper you were given"

I'm afraid I flew into a bit of a rant & stomped off, so today, armed with the documents I showed when I ordered the plate AND the receipt I was given which said NOTHING about taking documents again at collection, I went back to Halfords & guess what? I was just handed my plate I told a message had been left on the seventh (it hadn't). No documents requied! (sigh).

But, on the upside, the plate is a very thin one - just a sticker on an aluminium sheet, so this is a good thing, I shall be cutting it down to the minimum legal size, so Halfords logo will be cut off.

While rumaging in the inner wing I found that one of the fuel filters it doesn't need was mounted on a "spacer" which is just a 1"sq x 5" long alloy block, NOT the work of the original builder I might add.

While walking into the house this afternoon I was a little surprised to see a cat in my dining room, it was startled & tried to run for the kitchen, claws on a hard wood floor don't grip well & it went into a four-paw drift as it rounded the corner, spotted a cat flap & tried to make good it's escape at full pelt. I was just in time to see it hit the cat-flap - which I've gaffer taped shut to stop draughts. There was then more scrabbling & skidding as it went past me out of the French doors & I haven't seen it since. I did snigger, it was like Tom & Jerry made real