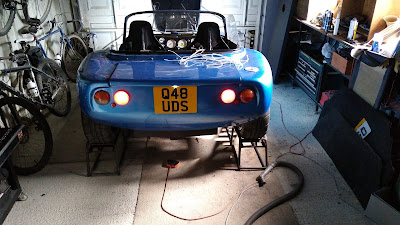 Today I tackled the fuel system, there were too many filters & there was not one protecting the fuel rail. So first job, remove a high pressure filter from the low pressure part of the system, also remove the mounting (which was heavier than the filter) & it's spacer block (which was heavier than both) & re-fit it with a simple p-clip to the side of a tray which I suspect was the battery tray when the car ran carbs. Then re-route all the fuel lines into a straighter route which as a bonus means they are also hidden below the air filter. Getting this right took most of the day, but I did also fit the new rear No. plate & wired up the lamp. The roll bar is still at the powder-coaters, but to me that looks smoother & better. I've also tried to find somewhere to put an oil catch tank. The car had one but it weighed 3/4kg empty which for a simple bottle to carry mostly air about in is quite a lot, so I'm looking for somewhere to mount something simpler & lighter, but it'll need to be emptied from time to time so access is an issue. 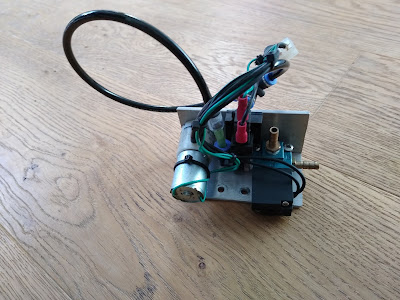 Just before I left the garage I tried to find out what a switch on the dash did - it had a red tell-tail & when I turned it on there was a faint hum. It turned out to be this item.

It was mounted under the dash top & has a small motor (about 1" dia) connected to a pump, when on it creates a vacuum in the pipes, there is a non-return valve to hold the vacuum, a solenoid operated valve to draw air from one of two circuits & a pressure switch which shuts the motor down when a vacuum is achieved. But it's so small I have no idea what it could have been for. Maybe something to do with the Supercharger? Some pre-oiling device maybe?

It weighed nearly 300g so it's gone anyway.