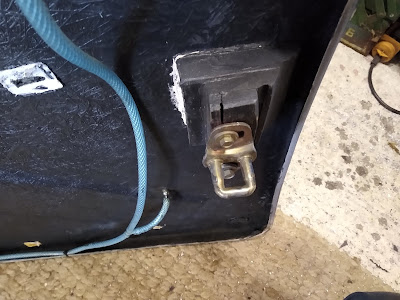 The car is stripped & the radiator is with Ashby Welding of Church Crookham to repair, while the front has been empty I've done a few jobs making wire routing more sensible & today I've mended the bonnet latch.

I had to mend the boot latch a couple of weeks ago after it separated completely & on Sunday I noticed the ugly block of wood (wood!) the latch was screwed into had split - see the black line where the screw is? 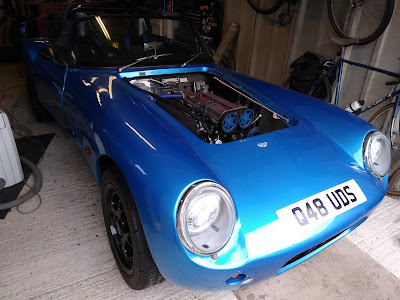 It turned out that what appeared to be a block of wood, was in fact two blocks of wood held together with only one screw.

So I removed the screwed on bit & briefly considered going HotRod (the car version of "going commando"), but it would need a central supercharger for the full effect so decided to be sensible about it, found some scrap aluminium sheet & made something with the same geometry as the split wooden block, but made from nice folded metal - with a couple of lightening holes obviously. 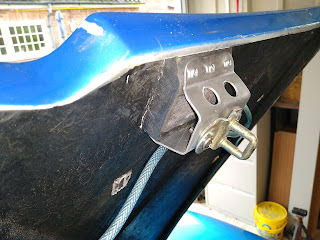 It actually closes much nicer than before, resting on the stops & then just going "click" as the latch engages with a gentle push.
Posted by BlatterBeast at 16:50