Today we were heading south, the car started again – which was nice, though I was by now getting concerned about the strong smell of hot engine oil. Our illustrious leader, feeling better than last night but still not his usual chipper self, elected to drive straight to the next hotel & therefore avoided some of the roughest, narrowest & most grass grown “roads” Wales had to offer. Oh how we sympathised with him as he cruised smoothly along well maintained A roads. 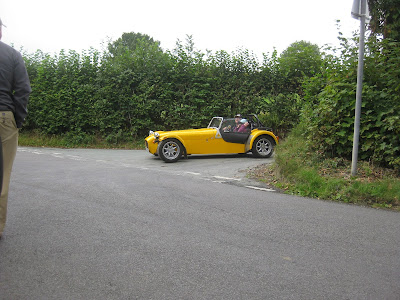 No, for us it was up onto the moors – after a little confusion with rogues appearing from unexpected directions. The moors is a good thing, yes there were a few tracks that made me fret for the Quantum's exhaust, but things went well until we rolled into a traffic jam in a small town. They were digging up the road & the lights took ages to change & the Quantum was sat pointing up hill & getting hotter. I knew full well that if I stalled it it would refuse to start for ten minutes, adding immeasurably to the transport chaos, so when I got my chance I gave it some extra revs, put the steering on full lock to get round the corner & forgetting it’s front wheel drive, let the clutch up. I was ½ way through the road works by the time the wheels stopped spinning (sigh). 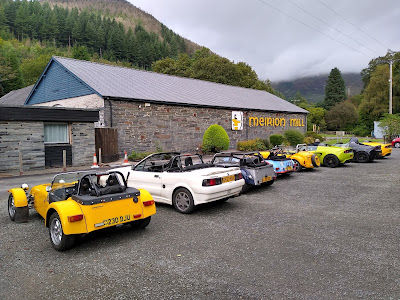 The next thing we had to contend with was a shower of rain – not too bad, no-one stopped to put a roof up, then just as we turned right, a shout came over the radio that there was a coffee shop if we stayed on the main road, so one car turned round in the road & I, followed by another car went up a house’s drive & down the neighbours, not realising that the car behind us was one of the home owners waiting to get home & looking very surprised.

After a pleasant coffee & of course cake (did I mention that I like cake?) we went out to the car park & were accosted by a group of old blokes congratulating us on driving “real” cars. I say old – probably about my age. As we set off the sky was greying & the rain started, but again didn’t amount to much & I think that was the last rain we saw all trip. As we entered the Elan Valley the roads were clear & the sun had his hat on - hip hip hip hooray


Not long after that I realised where the oil smell had been coming from. I’d fitted the oil catch tank from the Stylus (shiny blue anodised & extremely heavy thing) & it was close(ish) to the heater intake which was drawing fumes in. I’d never noticed it before because the car had only got properly warm when going to my Dad’s or brother’s, both those trips are round the motorway & don’t slosh the oil around much. So I could stop worrying about that & devote all my energy to worrying about whether it would start next time I shut it down. 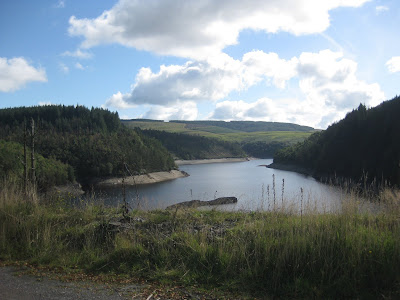 After visiting Devil's Bridge station again (yes more cake - what of it?) there were more moorland roads & a road we called “the lake road” because there was a lake. It was was EPIC, really enjoyable, though of course none of us have a clue where it was. 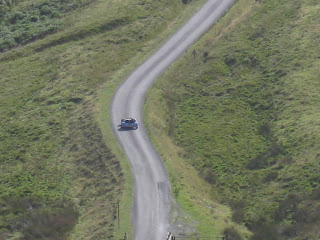 When we returned to the main roads we got stuck behind a cattle truck – I say “stuck” but it was keeping up an impressive pace & it didn’t hold us up by much. Then there was a need to refuel. But the petrol station was busy, I had to wait, The Quantum got hot & sure enough refused to start. Fortunately there were Rogues about & a short push got it going. 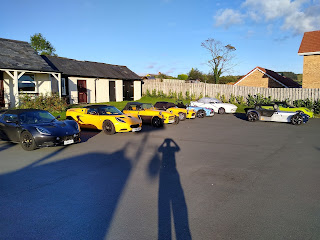 By now the time was getting on, so we trimmed the Black Mountain from the route as we’d be doing it tomorrow anyway & we headed for the hotel. In fact apart from our illustrious leader I think I was the first to arrive.
Posted by BlatterBeast at 18:41