Well - a few things. Did I mention that the fuel "crisis" whipped up by the media has left me with a bit of a problem? The Cactus has about 600 miles worth of fuel in, so I'm leaving that on the drive because I'm going to Scotland next week, so I'm using the Quantum for general gadding about so I can't work on it. BUT that also means I can't start the real work on the Stylus either because that'll immobilise it (sigh). 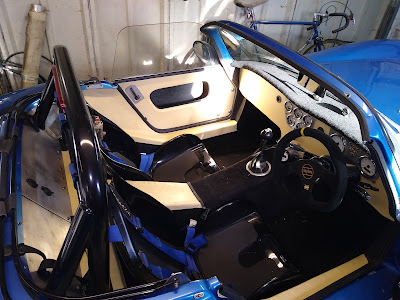 So what to do? Well, a couple of weeks ago a roll of cream vinyl arrived so I've spent the last couple of days trimming the Stylus' insides. The first thing I had to do was take out the roll bar, the alloy panels under it & the seats. That done, I covered the parcel shelf & but the panels & the roll bar back. that in turn meant doing some wiring in the boot because one job always leads to two others.

The back of the trans tunnel was next, followed by both door cills, then the awkward panel behind the door, I measured & cut two pieces only to find I'd cut them wrong! OH NO! Would there be enough vinyl to finish the job???

Anyway having done them & the doors it looks quite good. It's by no means a proffessional job, but the carpet on the trans tunnel is pants & my efforts are a/ good enough for now & b/ better than the worn 20 year old flocking that was there before.

As well as all that, the door bell heralded TWO more car related items arriving. One was a cheque from the DVLA for the balance of the Stylus' road tax & the other was an Audi pulley. 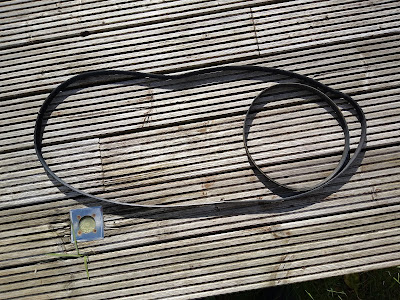 The story goes ...... The blacktop Zetec has no fewer than seven pulleys on the auxilliary drive belt & by the time you dump the power steering pump, the antilock brake pump, the air conditioning pump & an idler there's three left. To the left is a picture of the belt it came with & the one it now needs. HOWEVER, the water pump is driven off the back of the belt so it turns the opposite way to the engine & it's pulley is smoooth. It's easy enough to buy an impellor which turns the other way so the pump can be driven off the ribbed side of the belt (other ribbed rubber goods are available), less easy to buy a ribbed pulley. Motorsport ones are easy enough to find, but are expensive & come in funky colours, so I did some research & by a roundabout route found a pulley from an Audi Q7 3.0 diesel. It's a little bigger than the Ford one & the cenre hole is a little larger, but the bolt pattern is correct & I can turn up an adaptor to cetralise it on the pump - £15 delivered. 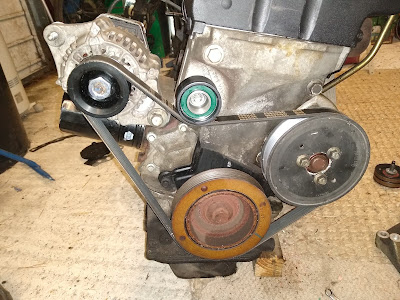 Even better, one of the belts I already have fits! the upper side of the triangle touched the front casting of the engine, but a pulley from a cam belt kit bolted to an existing hole in the engine, diverts the belt & increases the contact area of the belt on the driven pulleys - Reeeeesult!.

Now, as if all that progress wasn't enough, I looked at the alternator  on it's bracket I made for £nothing & thought about an adguster. Years ago I was making a complicated clutch pulley system for the Fury & as part of that bought a track rod for a racing Kart. It didn't get used, but it's a hexagonal tube with a rod end screwed into each end - but where was it? Did I even bring it from the last house? Would the project stall even before it got started? 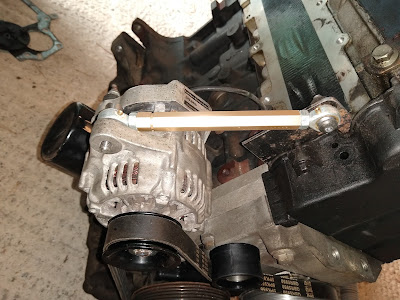 Yes I did bring it - it was in the second drawer I looked in.

I made up a bracket to pick up two inlet manifold mounting holes, cut the hex tube down & re-tapped the end, job done bar a little finishing tomorrow.