Not A Good Day At The Office

It started badly, to get a total mileage for the Sunday morning run I'd made my address the start & end points of the route, this meant that on Sunday morning no matter what I did the satnav just kept taking back to my house by the shortest route. I ignored it & set off in vaguely the right direction & after about 1/2 hour it sorted itself out.

But all was not well. I'd topped up the coolant the evening before & as I drove along the gauge was reading around 100 rather than it's usual 80-90. I thought I must've got an air lock in the pipe while the system was open for filling (there's no header tank), I thought it would clear, but when I met the others on the A24 it still hadn't. But there were no obvious bad signs when I opened the bonnet & it started easily enough, but soon climbed back to 100 deg. I was now worried & after 15 mins or so having lost the others anyway, I set the satnav for home. At this stage the gauge was around 110 & as I crossed the Hog's Back (it's a road), I switched the engine off to coast down the long hill. Again it re-started, but was now smelling of hot things, so in Flexford I pulled over & switched it off, I opened the bonnet & saw water on the chassis, I walked round the front & there was water pooled in the radiator intake & running down the road. 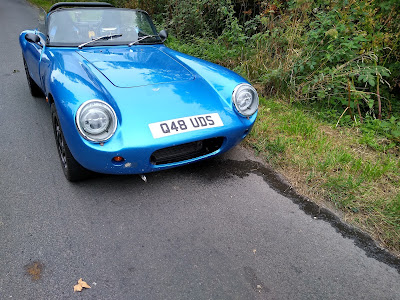 I called my brother (who was still in bed at the time) & he kindly came & towed the stricken Stylus back after putting 5 litres of water it & watching it all run out again. 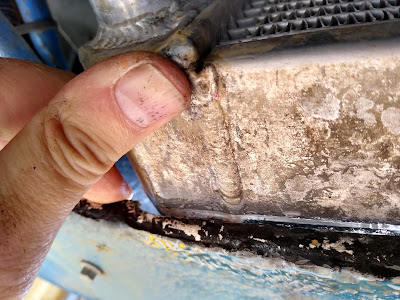 In the afternoon I set about finding the problem & it didn't take long. Another of the very expensive parts the car didn't need - the fabricated aluminium radiator had for some reason been mounted on 2 1/2" long spacers, this put the front face of the rad inside the nose. To make it fit, someone had pulled the front valence down, bolted on the rad & let the valence spring back against the aluminium. The main constituent in glassfibre is very abrasive - that's why they make glasspaper from it & the body lip had worn a groove in the rad right through to the water, when I topped it up there must've been mere microns holding the pressure back. 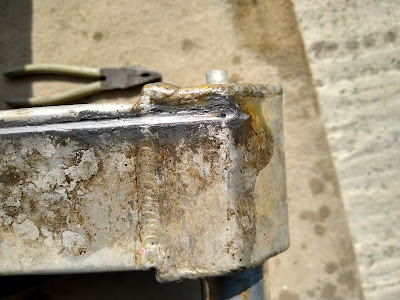 So I'm expecting the engine to be shagged having been run air-cooled for some time (sigh), but I can't find out how bad it is until I can put it back together - & therein lies today's tale.

As I've said, when the car was first built it was supercharged so someone had machined two Zetec crank pulleys to fit together so one could drive the supercharger, the new pulley drove the alternator & it's pulley had been extended. Ideally I wanted to lose the electric water pump, but I had no pulley for the one blocking the hole in the engine & I was loathe to spend money on Silvertop parts because if the engine is scrap that would limit me to finding another Silvertop. So, sensible pants on & keep the electric pump. But it was "mounted" by hanging it from a chassis rail by two tyraps. I could mount it better, but I needed the space currently occupied by the second pulley. Fortunately it came off the engine easily enough & separated nicely as well, the same could not be said for the extended pulley on the alternator, I had to saw it off to get to the nut, then grind the nut off & the stump of the pulley still wouldn't budge, but going at it with a blow-torch set fire to the gunge that had been used to hold it in place, so it's now off. Whether the alternator will ever work again is a thing for another day. 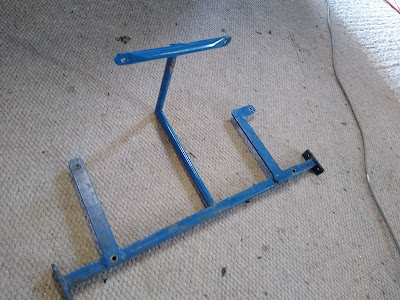 Also on the removals list was a large tubular bracket growing out of the rad mount, up over the top of the rad & down again - presumably holding a charge cooler. It got sawn off & I thought the long "stick brackets" holding the radiator looked a bit iffy, so I triangulated the base to stiffen it a little.

In fact all the removable bits of chassis were taken off, cleaned & painted & put back on & the rad is now with "Ashby Welding" in Church Crookham who I've used before & have always been spectacularly good, so hopefully they can mend it. 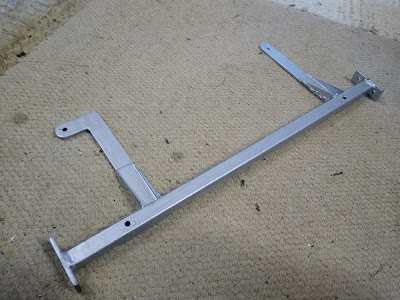 When it goes back together it will be better than it was & lighter to the tune of another 3Kg - I've now take 15kg off the car - getting on for 1/4 of my weight!
Let's hope it still works when it's re-assembled.