I have a bad feeling I've used that title before.

It's all a bit confusing at the moment. You would perhaps think that having three cars to call upon would make life easier, but no. Before I went off on this year's Rogue Runners Wales tour I filled the Cactus with diesel just because it was low. I filled the Stylus up before it's ill-fated first blatt & I filled the Quantum up when I returned from RRW21 for no better reason than I wanted to work out the mpg.

So no the media have created a fuel shortage out of nowhere I actually have plenty, but there's the rub. I'm going to Scotland to see family in a week & a half - I fully expect the whole storm-in-a-fuel-cap to be over by then, but in case it isn't I'll be leaving the Cactus on the drive as it has about 600 miles worth of diesel in it.

So I need to be using the Quantum.

So I can't move the Stylus out of the garage.

So I can't do the jobs that need doing on the Quantum.

But equally, I can't do the jobs that need doing on the Stylus because that would immobilise it & then I can't get the Quantum in the garage to do .......... etc. 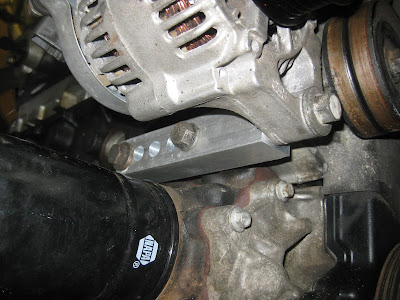 However, I did pop over to my brother's today & make use of his pillar drill & lathe to make a mounting for the alternator for the engine that will go into the Stylus. It's a simple block of alloy that was used as a spacer under one of the many fuel filters. I've drilled a couple of mounting holes, put a threaded hole in one end & just because that hadn't put quite enough swarf on my brother's garage floor - added three lightening holes. I faced off the end on the lathe & it fits a treat, but the faced-off end needs trimming back by about 6mm - this was expected as I was never going to be able to get an accurate dimension while holding the block up against the engine with one hand, the alternator up against the block with the other, wrapping a belt round the pulleys with my teeth & having a steel rule taped to one knee. No. Better by far to make it fit the engine, the measure properly with it bolted up. 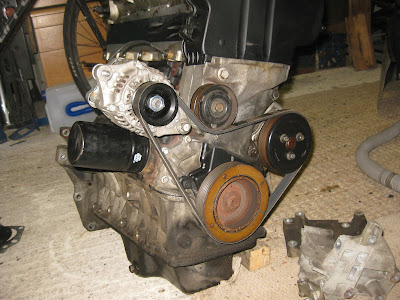 I even had a belt the right length!

I may take that idler pulley off, it just depends how close the the alloy front cover casting the belt comes.

I now need to make or find an adjuster bracket, but that's the easy bit.