Well I got one thing done to the Quantum before I got distracted by the Stylus.

I put a hose on the catch tank breather to move it away from the heater intake - took 35 seconds, 25 of which was finding a hose the right size. But there are things I need to do to the Stylus before moving it outside to get the Quantum in the garage. 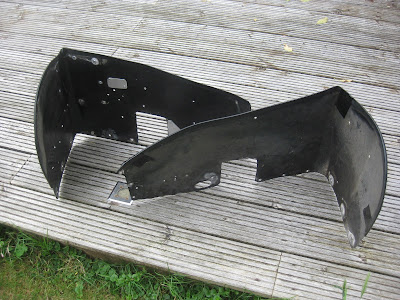 However - this isn't one of them.

The Stylus has aluminium inner wings - this is a good thing & proper "racing car". Over the years they've got a little battered &:-

Many holes have been drilled to mount things that are no longer there.

The foam / glue holding the top edge has come away.

One mounting hole has a large fatigue crack all round it because there's no front mounting. 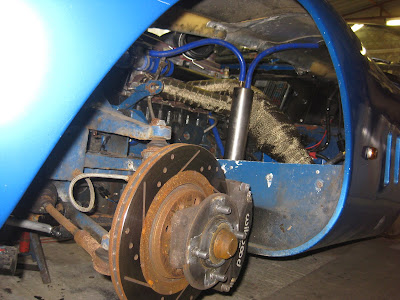 I wasn't at all sure they would come out of a fully assembled car, but after undoing the collection of fasteners (cap head & button head allen bolts, studs with nuts, self-tappers & a phillips head in both M5 & M6), I was able to deform them enough to get them past the suspension & brakes. The passenger side one was fine, the driver's side - not so much.

It looks like an access panel hes been cut into it as well as a one inch hole & as I mentioned there was no front mounting, so the next fastener has fatigued all round.

I removed the bolts from the access panel & pop-riveted it on, a new reinforcing plate was made for the inch hole & the fatigued area now has a stiffener pop-rivited in place.

On both sides I trimmed the top profile & glued on a "leaf seal" I bought for the Quantum doors, but turned out to be the wrong size - perfect for the Stylus though

I shall leave both inner wings out of the car, it'll make refurbing the front suspension much easier & may help when I take the engine out too.