OK I was supposed to be tidying the house this afternoon, but I thought I'd just do a quick job on the car......

One of the things this led me to was the stereo. The dash is all black - except for a shiny silver stereo, I thought I'd take it out & have a look. I found this:- 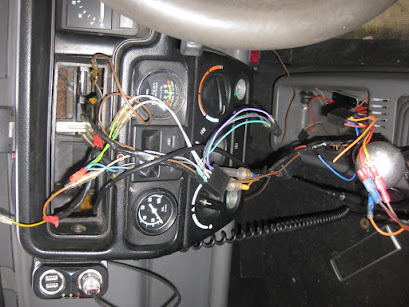 Yes it seems Blogger still won't show pictures the way up they're saved.

The car has a neat (Ford) joystick arrangement for adjusting the four speakers. All the wires are cut off.

That's not all. It has a choke knob which lights up when it's pulled out. The guy explained that it's a Weber carb so the choke doesn't work well, just give it two sqirts of the throttle - & yes that works. But the reason the choke doesn't work well is not because it's a Weber - it's because SOMEONE HAS TAKEN THET CHOKE BUTTERFLY & ITS' OPERATING ROD OFF THE CARB. They left all the cable & levers there though. Taking the opeating rod off  leaves a 3mm open hole into the air filter, which isn't too bad, not much is going upwards into the air cleaner, but why when there's an open hole, did they bother fitting a cork gasket to seal the airfilter on? Further more, why did they fit TWO gaskets then do the bolts up so tight it's distorted the flat mating surface of the air filter?

I love old kit cars, I really do. It's like archeology, picking your way through the midden of evidence, trying to work out what people were trying to achieve.