So, picked the Quantum, what did I learn? Firstly it’s near impossible to drive! The gear change is badly worn & is as sloppy as a sloppy thing, gear selection is a petty random process, the choice you get is – move the lever forwards – any one of first third or fifth, move the lever back – either second or forth.

But that’s not the main issue. The big problem is the clutch. Pushing the pedal to the carpet isn’t enough, the clutch disengages when the pedal is buried deep in the carpet pile making gear selection a difficult as well as near random process.

As the car was close to my Dad’s house we called in there, then called in at my brother’s where we decided the gear selection problems were too large deal with, but did find the carpet had rucked up under the pedal which wasn’t helping. So while my nephew set about adjusting the handbrake, I did a few minor jobs & had a general look-about & my brother started looking at the rear exhaust mount. It was a proper exhaust hanger which was good – but “attached” to the car with a broken tyrap though two holes in the bodywork – which wasn’t.

After a while he realised that he wasn’t going to have time to make something proper, so we replaced the broken tyrap & I set off home in convoy with my nephew.

I stopped off at the shops where a young lady commented “nice car”. OK she was about 12, 14 tops, but it was nice to hear.

So the Quantum arrived home. By this time it was getting on for evening time, so again I decided against taking on the clutch & went back to the guaranteed MoT fail, the rear exhaust mount. What I needed was some steel of decent thickness, not something I have a lot of, but a brief search of my metal store in a large steel cabinet made me stand back & realise the cabinet itself had unused document hanger rails about 3mm thick. I took one out & flattened one flange, drilled two holes & after a brief struggle, fitted it between the body tub & the anti-roll bar mount. A tube bolted to it went through the upper hole of the exhaust hanger & Bob’s your uncle. It also got rid of four sets of very rusty nuts, washers & bolts that were too short & replaced them with nice quality zinc plated bolts, stainless nylocs & large repair washers. A plastic spacer aligns the exhaust with the curve in the bodywork & it’s job No. 1 done.

With the handbrake adjusted & the exhaust hanger properly mounted, the car is in-theory MoT-able, if I can rig up a fix for the clutch it’ll be drivable too! 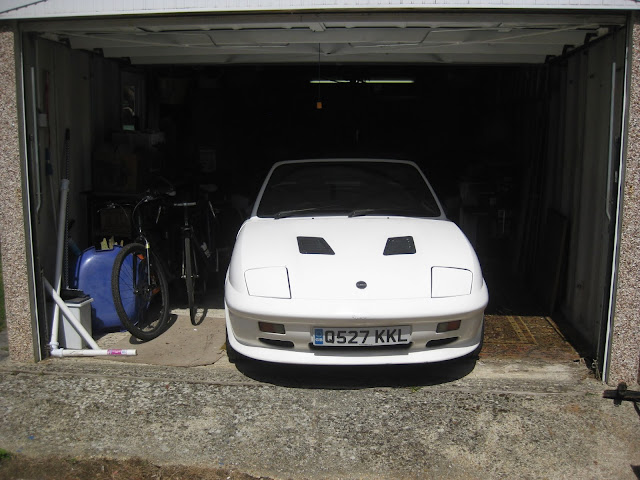