One thing I did to the Fury that I liked out of all proportion to the effort involved was to move the coil pack down below the throttle bodies & run the HT leads up between the TBs, which kind of made it look more old school - as if there was a distributor down there.

On the Fury it was done purely to make the engine look older than it was, but the Stylus had a problem. For some reason it has been fitted with a water rail - it doesn't need one,there's plenty of room for the Ford thermostat housing but it's there, with the business end under a none-to-pretty home made coil pack bracket (1/2kg). this is a problem because I need to run a hose from the water rail to the heater & the coil pack bracket is in the way.

So, re-cycling is a good thing & the 5mm plate from the footwell that used to mount the ECU got cut down, re-shaped & now mounts the coil pack. On the Fury I had HT leads made to fit, but when I was struggling to get the Quantum to run nicely I'd bought an HT lead set, so using leads 3 & 4 from both sets I had what I needed. Also in the "good luck" column was the coil pack trigger wire being long enough to reach in its' new position. In fact I tidied all the legs of the engine bay loom while I was there, so they don't dangle quite so much. 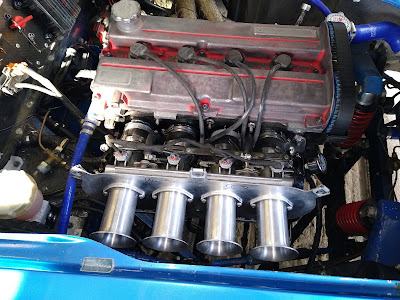 But removing the coil pack bracket gave me another problem. I'd already moved the Fuel Pressure Regulator once because it was mounted at the top of a leggy bracket welded to the coil pack bracket & I'd cut off the leggy bit & re-mounted the FPR. the other day I searched around the back of the engine in vain to find somewhere to put it, but every place I tried something got in the way of the input, the output, the vacuum line or the gauge was facing downwards. I was looking again today to no avail, when I was "struck by the bleedin' obvious" - the fuel rail is just a pipe - it doesn't care which way the fuel flows though it, so after cutting the rigid pipes down a little to make the hose runs smoother, I made a bracket from another off cut of the ECU plate & mounted the FPR at the front & re-routed all the hoses to suit.

I tidied the tools away, checked all the hoses were connected & tight, turned the key, the Low Pressure pump filled the swirl pot, I switched on the High pressure pump & the fuel rail filled, I pushed the starter & it fired & ran - badly. I switched it off & felt the exhausts, 1 & 4 were cold, 2 & 3 were warm - coil pack - it's a wasted spark system so 1 & 4 fire together as do 2 & 3. I unplugged the connector, plugged it in again, turned the key, pushed the starter - perfect idle. 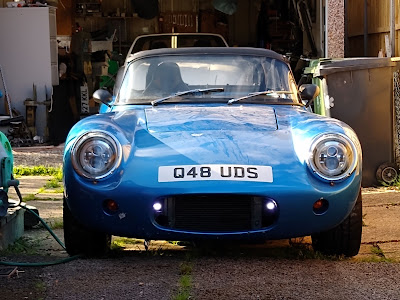 One last job, make up a bracket to stop a couple of HT leads getting wrapped around the throttle linkage & that was it for the day - sort of.
As I have all three cars mobile I've swapped the kits round & took some photos of the Stylus with the DRLs on & off. Tomorrow I'll spend a little time on the Quantum.
DRLs - now you see them. 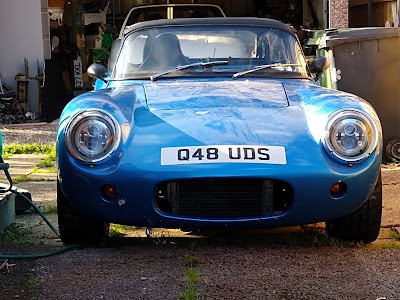