Over the past few weeks I've been re-working & testing the wiring. A few times I've noticed that when the fuel system came on with ignition (High Pressure pump only - the Low Pressure one is switched off) there was a faint smell of petrol. Only very faint & almost instantly dispelled. A couple of times I'd felt around for wetness & found none, so I'd filed it under "I'll find out what that is one day".

Today was that day.

I decided that with all the bits fitted I was in a position to do a full system test & indeed start the engine. I switched the switch that would allow the LP pump to run, turned on the ignition & pushed the starter. The engine fired almost straight away & settled to a burble with the satisfying, near motorcycle revviness of a lightweight flywheel, the gauges swung to expected readings with excellent oil pressure, but next to no fuel. I was looking generally around to see if things I'd hoped for were indeed happening when I noticed a splash of liquid hit the air filter - then another. Standing up I could see it gushing from under the wing. It could only be petrol. With no ignition lock I had to find the screwdriver & turn the switch off, the engine died, I got out of the car to find a spreading pool of petrol a yard across.

"Eek" I thought (OK, what I actually thought isn't reproducible in a tome of this quality).

I found some rags & threw them in the pool, pushed the car back away from it (yes, yes I should've just evacuated), then took the sodden rags outside & allowed the remaining damp patch to soak in / evaporate.

The problem turned out to be a hose from the swirl pot back to the tank. It was detached so when the LP pump came on the tank filled & overflowed. Easy fix, but that explains the faint fuel smell when the HP pump was cycling petrol through the fuel rail back to the swirl pot. 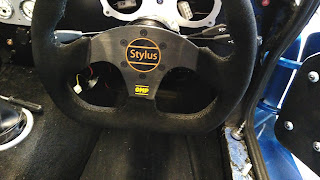 In other news I've printed a centre for the steering wheel.