One disappointment in the Stylus when it first arrived was a leaking axle, just a weep from the offside bearing, yesterday I decided to deal with it. I'm generally a bit cynical about rear disc brake kits on kit cars, there's not really enough weight to make them work for a living & then they start seizing & so on. 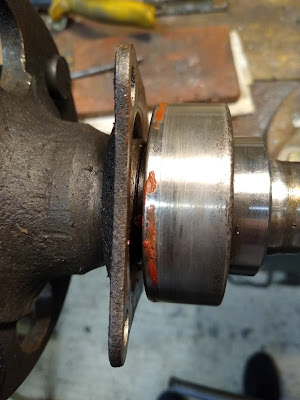 But - when you need to pull the half shafts they are a godsend! Ten minutes from jacking the car up to half-shaft-in-the-hand. At first I thought the bearing had had it as there was a slight movement, but I now think they're fine, a quick google found a forum with a couple of people describing a weep after an axle rebuild & many people suggesting the outside of the bearings had not been sealed. A quick rifle through the Haynes-book-of-lies found the page for half shaft replacement & sure enough there was no mention of sealant. There was evidence of the brick red sealer, but it was patchy & old, the LSD was only added a couple of years ago & the car's hardly moved since.

While I was under the back I noticed a single drip of oil under the near side & pulling that half shaft showed the same red stuff, but also black silicone - but again it didn't look new.

So, did whoever fitted the diff &/or brakes not apply any sealant? Replacing the bearings is going to cost >£100, so I've cleaned up all the surfaces & tried a little blue sealant to see if that fixes it. The axle was topped up & took about 150ml. 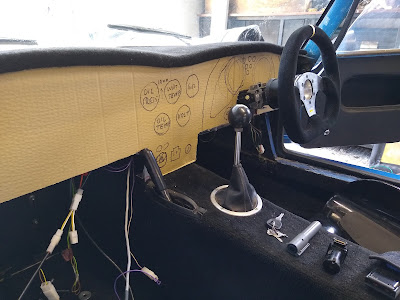 Apart from that bit of "proper" mechanical engineering, I've been working on the interior. I had already made a dummy dash from corrugated card, now I translated that to the dash blank from CBS. It's waffer theen aluminium bonded to a plastic core (I suspect it may be the stuff Grenfell Tower was clad with, which may explain why it's available for dashboards). The cutting went OK & the basic shape now fits. I'm still agonising over the speedo & tacho. I don't really want 100mm clocks (though I can make them fit), but what I REALLY don't want is a speedo that goes up to 180mph & a tacho that says "8 cylinder" on the face. In the case of the speedo, the scale is such the the difference between 30mph & 3 points on my licence is hard to spot - I would be perfectly happy with a speedo that goes up to 80. If I need any more I have the SatNav. So it looks like the Cobra clocks will be going on Ebay & I'll buy another Speedo & tacho in 80mm flavour (sigh). 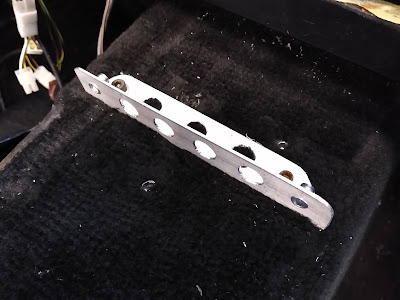 Having cut out the dash, I needed brackets. It'll be held to the trans tunnel, each side wall & to the dash-top - which will be bolted in, not held on with velcro as it was. I made up the trans tunnel bracket & inevitably put some holes in it because that's what I do.

I wasn't brave enough to start cutting the holes for the minor clocks, so I moved onto the footwells.

When the car arrived the outboard side of the off-side footwell was covered(ish) in a ratty bit of carpet that had at one stage been glued on, but as now just held by the bolt through a P-clip retaining the bowden cable for the brake bias. 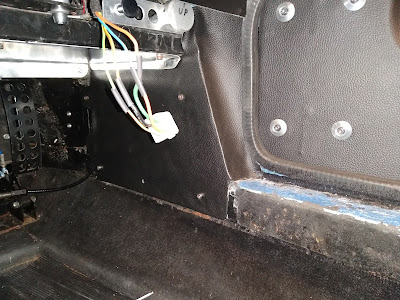 At some intermediate stage someone had re-attached it with duct tape which had gone crusty & fallen off, leaving the thing in a prime location to wrap itself round the driver's feet at some inconvenient point. I removed it & found the roughly made aluminium panel behind it was held on with yet more self-drilling roofing bolts. I drilled the holes out a bit, fitted riv-nuts & straightened the panel out, trimming edges & rounding corners. There was another aluminium panel just ahead of the door shut & I wondered for some time how to make it all blend together without too many edges. In the end I glued vinyl onto the flat panel but left a large flap, when the glue was glued I put more glue on the flap & on the second panel, bolted the flat panel in place, put the second panel in & carefully wrapped the vinyl onto the second panel & beyond so it's trapped by the door seal. It was a bit fraught as things using contact adhesive tend to be, but I'm pretty pleased with how it turned out. It's so good that I'm pretty sure that NO-ONE WILL EVER NOTICE IT - which is a good thing - sort of. It'd be nice if someone said "hey, those footwell panels look REALLY good" just once. By the way, the fasteners are temporary ones, black stainless flanged button-heads are in the post. 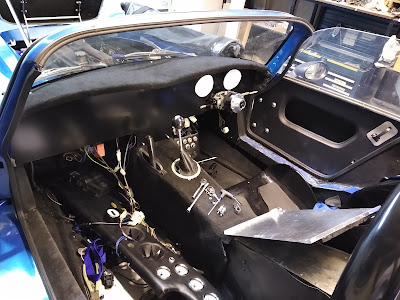 The near side footwell had no trim at all , just the ECU bolted to a 5mm plate which I'd taken out a while ago. With a new panel created to match the off side one I repeated the process & amazingly - that worked as well! This one needs a little re-work to add a port for the ECU connector. I expect I'll print something.

So the interior is coming together. The next step it so take a brave pill & cut the holes for the minor clocks, then disentangle the wiring on the old dash & set it up nicely on the new one. Same with the switches, cover it in vinyl & the car will be nearly ready for the road.