I was pretty down first thing, then an e-mail from the solicitor stating that there could be thousands & thousands to pay in order to transfer pensions to my wife's name (to add insult to Ian Drury) got me worrying. I called all three pensions she'll get & none of them want money to transfer it, so that was a relief. After that my mood slowly improved & I trimmed & glued the screen vent plenums onto the dash top (deciding not to use the vents I'd bought), then I adjusted the Quantum's suspension & did some other tiddivating in case the guy that called me buys it. 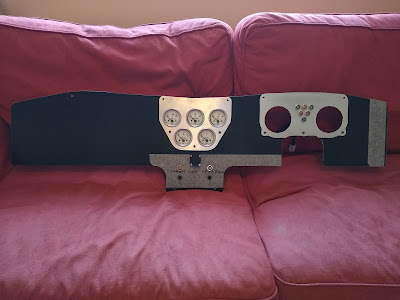 Back on the Stylus I fitted the dash top & ran the hoses - the air side of the system is now complete from intake (not attached yet) to screen, so I wired it up & then also wired in the "Spitfire" starter button (it is, but it's just a standard part used on loads of aircraft & probably all sorts of other stuff too) & the de-mist & rear fog switches (Sea Harrier parts - guaranteed) & the warning lights. I'm still waiting on the ignition switch & the two primary clocks, but the dash is almost finished, so the car is almost driveable. If it goes to Wales in place of the Quantum it'll go with loads of trimming still to do & probably without a passenger seat. There's still lots still to do, but the list is getting shorter by the day.