Did I say things went wrong on day 8?

I don’t mean things went wrong like a breakdown or a crash, just that I seemed to be stymied at every turn. My plan had been to leave my Son’s early & meet the other Rogues somewhere around Moffat. Then I realised their route had changed significantly & also, if I wanted to get to Stranraer I was looking at 360 miles & lot of hours. I decided to leave Stranraer for another day, but I didn’t have the Rogues new route. I asked if someone could e-mail it. An hour later I asked again, then three came all at once, so I opened the e-mail on the laptop, filed the attached route, opened the route in TomTom MyDrive (which I hate) & coppied it to the SatNav. Then I did it again & made sure the “SYNCHED TO DEVICE” pop up thing popped up, shut the laptop down & went to bed.

In the morning my Son suggested breakfast out, so we went into a café / bakery in the local village. My Grandson hadn’t had any breakfast, so my daughter-in-law asked if they had any fruit. The man behind the counter looked horrified & said in a broad Scots accent “FROOT? NAE! Nea froot!” Having watched the Scottish diet being ridiculed on a number of comedy quiz shows, I was very glad of my face mask which meant I only had to stop my shoulders shaking, not keep a straight face as well. 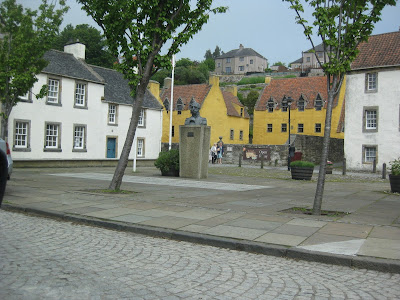 So we ate breakfast & my grandson entertained the clientele with effortless cuteness (he’s just tuned 1), when we left, I turned on the SatNav, went to the routes page – no route (did I mention that I HATE TomTom MyDrive?). I put a message on the WhatsApp group asking if they could estimate where they would be around 12:00, but knowing they would be driving I set off. I thought I could maybe head south west & if a rendezvous came up I would be heading the right way, so tried to head for the Kincardine Bridge – got lost, but saw signs to Inverkiething. Knowing this was very close to North Queensferry & the Forth Bridge I thought I’d get a photo of the car under it, I drove through Inverkiething, but saw no signs & only after 20 minutes did I realise I’d already driven past all the things I’d been looking for – the railway bridge over the road, my ex-in-laws old house & the road to North Queensferry. So eventually I got there & took my photo, then headed west along the shore road, which is very pleasant & passes through several very old villages. 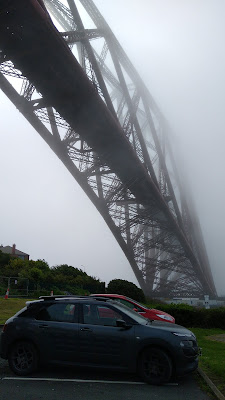 I reached the old Kincardine bridge (didn’t realise there were two) periodically checking for WhatsAp responses, but then I spotted the Kelpies, so parked the car & walked along a canal to where they are & took some more photos. At around this point I realised that I wasn’t going to catch up, so set the SatNav to “The Glen” in Selkirk & just rumbled along, occasionally stopping to take photos & kicking myself for not staying with my Son & his family for the day. 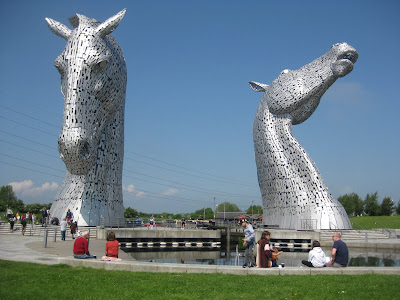 I went back to the hotel – it was still locked, but a car that was just leaving reversed back & the proprietor directed me round to the back so I could get in & the nice lady of the house made me a coffee. I put the day’s videos onto the laptop & decided to go for a walk along the river – which was nice - & while strolling back I was dimly aware of someone calling, as I surfaced from my thoughts I realised they were calling my name – had to be a coincidence, I was 350 miles from home, but the calling became more insistent & I realised it was the nice lady from the hotel, also out for a walk who had not only recognised me as part of the car club, but had remembered my name & was telling me that everyone else had returned. I really really envy some folk’s people skills.

On my return I heard the main group’s stories of meeting Bob of the Scottish Kit Car Club, of losing him, finding him again, missed way points, turn-arounds & all the random shenanigans we’ve come to expect. Then another excellent meal at The Glen, a couple of beers & sleep.

Tomorrow was going to be a long day.