I'm sitting here quite excited because today my next project has arrived.

People in the SKCC have been kindly sending me links to cars they've found ads for on the interweb & two of them sent different ads for the same car, one on Faceache the other on Pistonheads. It was another Jeremy Phillips design, quite similar to the Fury, but this is the later Stylus. I left it a week or two because I still had the Quantum to fix and really didn't want another car to work on .... and ..... and, but one day in a moment of weakness I sent an e-mail asking if the car was still for sale - it was - bugger, I had a choice to make then. 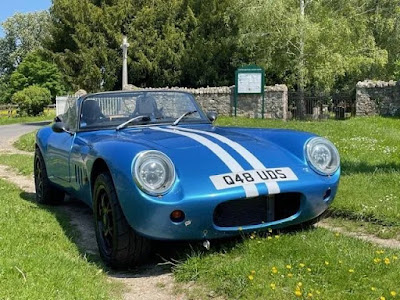 I arranged to go & see the car on the Friday afternoon & after a meandering route selected by the SatNav (I'm guessing the M25 was in difficulties) I arrived & found the car. The owner appeared & I started my inspection.

Initially this was a little disappointing, the photos made it look better than it was, but Stylii don't come up for sale often & as I looked at it I realised it had been very well built & the owner explained it had been built as a street-legal track day car with a supercharged Zetec, but the supercharger had been removed. That meant the basic spec was actually very good, the stronger V6 gearbox with the taller 1st gear, limited slip diff, big brakes, huge aluminium radiator, so really what it needed was a refresh. It started OK & a trip out showed no real problems (the suspension was a little squeaky but it has hardly been used in the last few years). 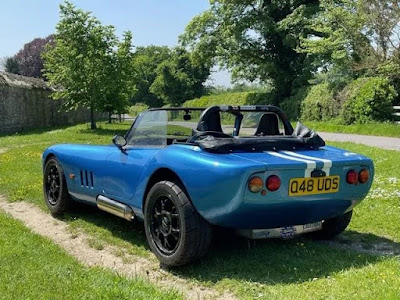 I went home & thought about it, the only thing bothering me was the price, I reasoned that the spec was better than my Fury had been, on the other hand the general condition was not so good, so I decided what I would've been happy to sell the Fury for & offered that.

A nervous wait ensued, but then an e-mail arrived accepting the offer & after a little negotiation the owner delivered it (saving all the hassle with insurance & tax).

As these things go, the very day the offer was accepted I was sent another ad, for another Stylus! From the pictures it's in better condition, has more power & is only a little more than my car's original asking price. Initially I was cross, but then I thought the car in the second ad is turbo'd - which I don't want, it's all finished - which I don't want & it is actually quite a lot more money that I ended up paying, which kind of confirms I paid about the right price. The only thing the second car really has in its' favour is a flip front.

So there we are - I am now a three car family all on my own & getting the Quantum finished & sold has become a more pressing priority. But did I work on it today? Did I hell, I have a new toy!

Poking round the engine bay revealed all sorts of things hidden away in odd corners. There was a reservoir for the cooling system & a reservoir for the reservoir, the first one is a stainless steel tube thing & really quite heavy, so I might look for a plastic one to hide away.

Then I found a catch tank for the oil breather - empty fortunately. It's a shiny blue billet alloy thing that's mounted in the way on the fuel system & weighs about a kilo, so that might be finding it's way onto E-bay as well. down in the depths of the nose cone is an oil cooler it might have needed when it was supercharged, a remote oil filter & a yard of hose, so that will be getting sold off as well. 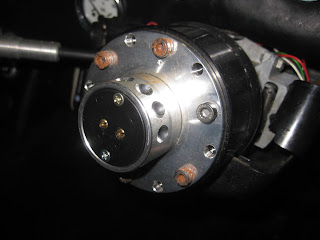 Good things I've found include a removable steering wheel (rusty steel blots replaced with titanium) & a Quaife quick-shift. It doesn't really need either, but I shall experiment & see if I like them. On the down side it has no heater. I'm not overly bothered by that as such, but is has no de-mist & it will need something as I've had problems in the Fury with the screen misting in the autumn. the Fury had a heated screen, but I don't think I want to take the screen out of the Stylus - of course if I fit a heater, the screen will crack the following day.....

So here is my fleet. 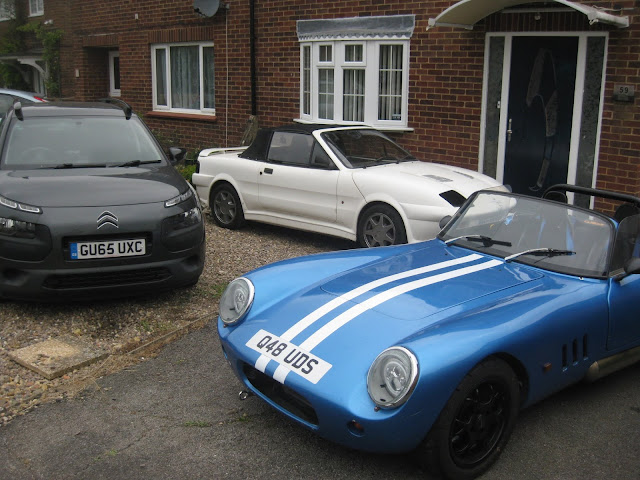