A bit of an odd one today, we were sharing our hotel with a bunch of guys on ruffty-tuffty touring bikes & inevitably conversations were struck up. They recommended a loop of road off the main Ullapool to Durness road that I’d looked at several times but never been able to fit it into a route. So we decided to go freestyle.

The plan was simple - head to Ullapool, re-fuel, turn right heading for Durness, park in the Kylesku Bridge car park, head back towards Ullapool, but take the first right, after travelling some way, set the SatNavs for home & follow them. Simple. A fool could do it

It didn’t take long to unravel. 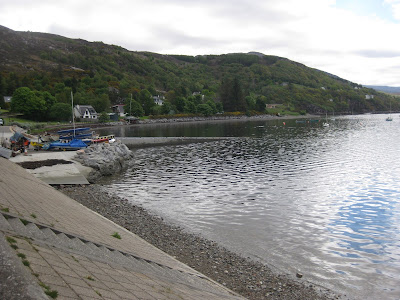 The journey to Ullapool was excellent – we even had a little sunshine, but at the first fuel stop the cars that didn’t need petrol parked up in a hotel drive, I found a spot on the “main street” & two Sevens joined the queue. I took a few photos on the front & looked round to see one of the Sevens had vanished, I went back up the road & the cars had gone from the hotel too. We had planned to have a stroll in Ullapool, so maybe they’d gone round to the free car park?

I turned my attention back to the petrol station to see how the Seven in the queue was getting on, but it too had vanished – sort of – Linda (the driver) was bouncing up & down on the pavement waving her arms in the air. I curbed my natural instincts to run away from the clearly mad woman & went to investigate. The blue Seven had boiled over while waiting in the queue & had been pushed to one side. With the bonnet off there was a little coolant left in the header tank, so not a blown hose, the thermostat housing (which are known to crack in Zetec engines) was dry, so not that either. That left the nightmare scenario of a blown head gasket (home on the “trailer of shame”) or a problem with the cooling fan. With the coolant topped up & the engine started the temperature climbed to over 100deg & the fan remained resolutely stationary.

At around this point the garage man came out & asked us to move as the car was parked on the forecourt’s main tank & he had a delivery due (he was quite understanding about it), so the Seven was driven to the other side of the forecourt & a couple of biker types came & helpfully told Linda it was the head gasket & she was going home on a truck. One of the items in Linda’s big box of useful things was a jump wire to remove the fan switch from the circuit, I installed that & still no Breeze. The fan was dead then.

So that was actually one of the least-worst outcomes. I suggested that Linda went “Hot Rod” & drove without the bonnet on, but that idea earned me a wrinkled nose, so we trundled round to the main town carpark in search of toilets & a brave pill before running for home. By now it was pretty clear that the other cars had moved on some time back, so I left a message on the WhatsApp & we headed back east. 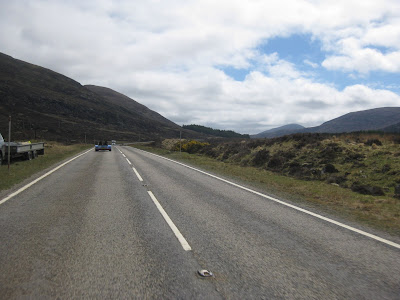 If it hasd really been the head gasket we wouldn’t have got five miles, but with the road wide & almost traffic free we rumbled gently the 40odd miles back to our hotel where I took off the nose cone & connected the fan direct to the battery to prove properly that it had died, then - after cleaning out an awful lot of insect parts - started looking for a replacement. Some years ago a place in Inverness had replaced a wiper motor on a Seven, so they seemed a good bet. I called the brilliant Car Builder Solutions who could get us a fan delivered the following day, so now we had a “worst case” plan. I scoured the internet for breakers yards but all I could find were places that wanted to buy my scrap car or places that could offer spares if I gave then a reg No. so they could identify the car type – which wasn’t going to work with a Kit. With just enough time to get there before “last orders” at CBS we drove into Inverness, but this time the 4x4 specialist couldn’t help, so we ordered the CBS part from the car park & when we got back to the hotel most of the others had returned, having had a very confusing day of caravan sites, missed turnings & hastily re-hashed plans. The other two arrived later after a very pleasant day visiting Skye which was apparently bathed in sunshine! Naturally we refused to believe something so obviously ridiculous.

So, another adventure was had.