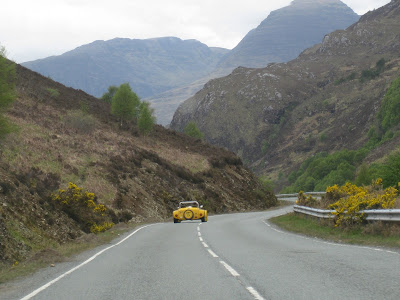 A damp start again as we headed due west, but the forecast was good – or at least dry - & the roads were pretty clear of traffic and they were good roads. Smooth, wide & fantastically scenic. 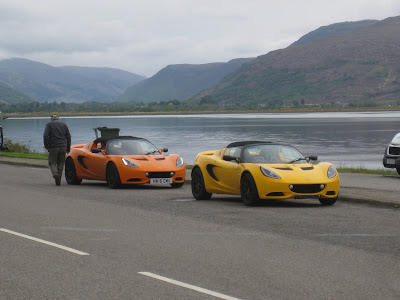 It was a short route today, just about 200 miles & for once the direct route was the best for us. We arrived at the bottom of Applecross Pass - Belach Na Ba (the pass of the cattle) – more or less together, I hadn’t quite managed to get past a 4x4 which disappointingly turned up the Applecross road as well. But as the single track road twists & turns up the mountainside the Rogues stopped at the only viewpoint parking bay & I was able to re-join, parking just a little ahead so the Cactus didn’t spoil the photos. 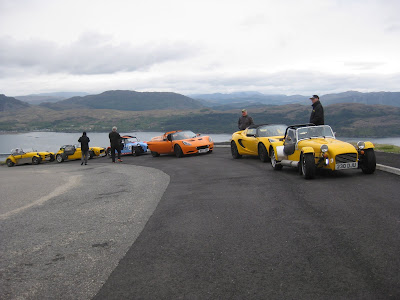 The low clouds today meant the views weren’t as spectacular as I’ve seen them in the past – but still pretty awesome. After a chat, photos & me swapping the GoPros around to fit ones with decent amounts of storage & battery, we set off again. Since the NC500 route was invented, Belach Na Ba has become a lot busier & today there was a fair few cars & even quite large camper vans coming down, leading to a few “incidents”, as one group headed down, the kits pulled into a passing bay that someone else had already parked up in, I could see there wasn’t going to be enough room, so I pulled into the next one down the mountain. 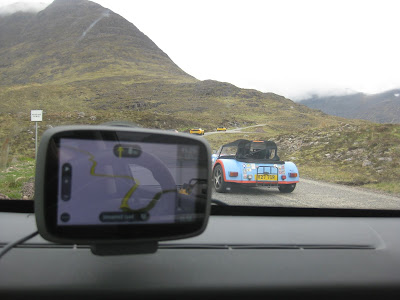 There was a delay while the cars coming down sorted themselves out during which a BMW decided that I & the brightly coloured cars in the next bay up must’ve parked & came past us – The Applecross Pass is not the sort of place to have your mind in neutral. It was all OK, nobody died, but really? You absolutely do not want to be reversing back down, so take a little time to understand what you’re seeing! 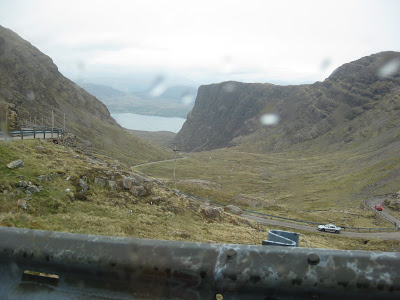 Anyway, little by little & with good use of the radios to report cars coming down, we got to the top & entered the clouds. Fortunately there was really very little traffic coming up as I went down through the fog & I found the others parked up outside the Applecross Inn – which was closed because it was a Wednesday apparently. But there was an open coffee shack pretty much on the beach, it wasn’t raining & it wasn’t blowing a hooley, so it was all very pleasant. 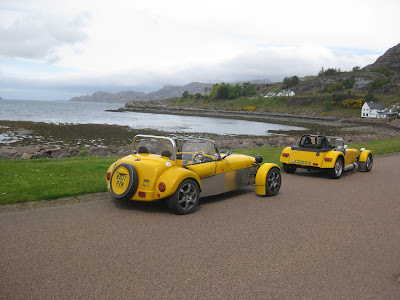 After a while we moved off north up the coast & this is also a fantastic road, perched on the cliff top with the Atlantic on our left we rumbled along – at one stage it went past & even through a herd of highland cattle & then east along the coast to our pre-arranged coffee stop at the lovely Shieldaig where we stopped, then all but three of us drove off again. The three that parked up walked back to the bar / coffee / cake shop, bought coffee & more excellent cake & sat outside looking out over the bay & the little island in the middle of it – also at a sheep made entirely out of old car parts – a “spring lamb” as it were. 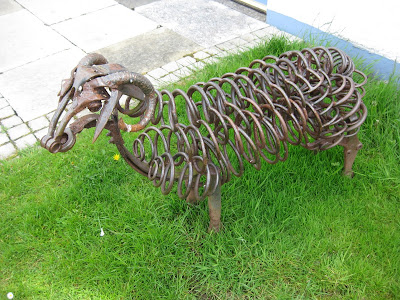 Fully refreshed, we climbed back into the cars & headed out of town. Just as we were pulling away, a couple came past on a trike, which got to the top of the first hill & stalled. We waited patiently making hardly any sarcastic comments over the radio – honest. After only a mile or so the trike pulled over & we headed back east on yet another superb road. Yet more fantastic scenery & very little traffic (& what there was often pulling into passing places to let us past). It made this part of the journey pretty special as well.

As we drove along we would occasionally pass a petrol station & the call would go up “anyone need fuel” no-one did, so we moved on. We three were split up by other traffic & eventually two of us rolled into the hotel car park. But where was the third? Perhaps there hadn’t been any more overtake opportunities & he was 5 mins behind? Ten mins past. Eventually a photo appeared on the WhatsApp group of our errant companion in a layby adding the contents of a petrol can so he could get back to the hotel.