This year was to be a little different (every Rogue Runners trip is “a little different”) because we would be heading north in two waves & the first wave went through atrocious weather on the Friday. But Saturday morning, up with the lark – or possibly the owl – the car (the Citroen Cactus this year as the Quantum wasn’t ready) was already loaded so it was just a case of pouring myself into the driver’s seat & heading east along the M3 & M25. Among the things loaded was a drill gun & pop-rivetter as one of the first wave had hit a pot-hole in a fully loaded seven & sheared some body mounting rivets. I was a little early, so cruise control on – no rush.

Only one person to meet at Lakeside this year & Duncan was waiting, sheltering from the rain under the half hood of his Seven. We decided to head straight out as the rain was only in the south. After an hour & a half of trunk roads we arrived at the breakfast stop just to the north of Peterborough, I went ahead to find the garden centre café while Duncan refuelled. It turned out to be ½ way along a dirt track not well signed & I went past & found it on the way back. Finding the way into the café was no easier, but I booked us in just in time to see Duncan, then Robert drive past. I sprinted out & caught up to give them directions & on my way back Linda arrived. So that was the four in the “second wave” all present & correct. 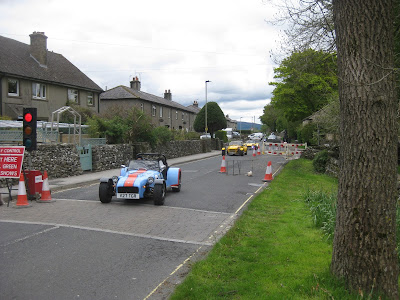 The breakfast was excellent & having chatted we sauntered out to the cars & headed north up the A1. It was another 150 mile slog to get to the point where we could turn onto the more interesting roads – we just needed to get as far from the south east in as short a time as possible to enjoy the better driving conditions. By now the rain had stopped, but somehow I had got separated, every now & then I would get on the radio & say “can anybody hear me” which they could & answered – but I couldn’t hear them. Eventually we rolled into Grassington, a pretty village where I thought we could get some cake & coffee for lunch, but the easing of lockdown meant the carpark was packed & at £2.75 min charge & a 15 minute queue to pay, we decided to move on.


The Yorkshire moors were as enjoyable as ever & the SatNav ETA was now counting down as we made better progress that it expected. Yorkshire became Cumbria, with an almost instant drop in traffic & after a while we rolled onto the M6 just in time for Tebay services, coffee & a trip round the farm shop for cake & beer (to take away). Suitably refreshed, we started getting messages from the first wave, now at our hotel, “would tea at 19:00 be OK?” The SayNav was giving an ETA of 18:42 at this point so we requested 19:30 & headed out.

We were soon on the A7 heading for Selkirk, but by special request we would divert onto the B2699 as it’s “a bit special”. I had come this way a couple of weeks previously to visit my son & it was closed for repairs, I had a back-up route, but today it was open & we had a very pleasant amble along it – which resulted in the SatNav giving a new ETA of 18:30. I had intended re-fuelling at Hawick, but road works kept me away from the fuel pumps, so I set off after the others & filled up at Selkirk. So I was the last to arrive at our hotel (the excellent “The Glen”) & found the others still standing around in the car park. 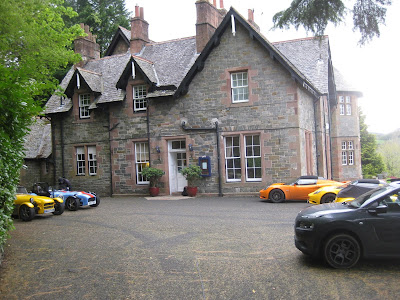 We had an excellent meal & as it was dry & still light, we went out to the car park, gently jacked the damaged Seven’s body back into position, drilled the rivet tails & fitted new rivets. Sorted.
Posted by BlatterBeast at 07:17